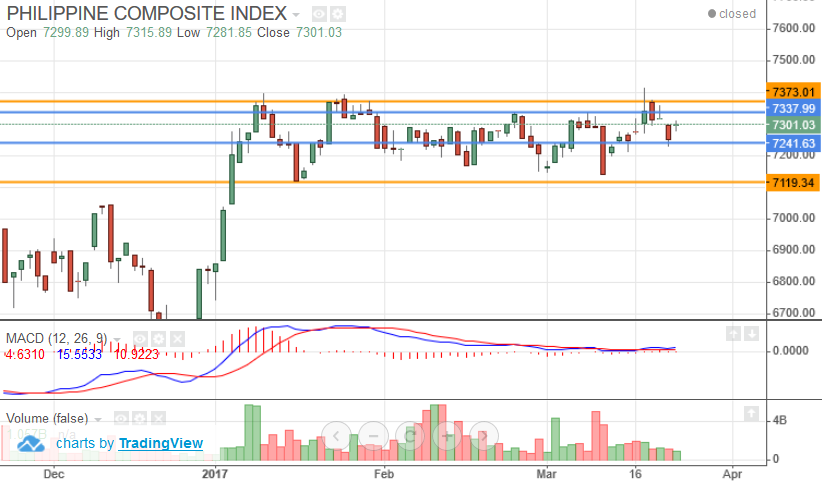 News Highlights: Bloomberry Resorts (BLOOM) reported a P5.7bn swing from P3.4bn net loss in 2015 to P2.53bn net income in 2016. Aboitiz Power (AP) would be raising P30bn via bond issuance to finance its possible acquisitions and investments. Metro Pacific (MPI) unit, MetroPac Water Investments (MWIC) received the Notice of Award for the Cagayan de Oro (CDO) 100 MLD bulk water project, which approximately cost P2.8bn. Meanwhile, the Monetary Board has kept the policy settings unchanged at 3.5% for the overnight lending rate, 3% for the overnight reverse repurchase rate and 2.5% for the overnight deposit rate during its second review yesterday. The BSP has trimmed its inflation forecasts for 2017-2018 citing ‘beneficial’ effects from the removal of tariffs on rice imports despite the prevailing upside pressures on general consumer prices.

Might trade slightly lower: After the Monetary Board decided to keep the interest rates of BSP unchanged, market focus shifts back to the Republican health care vote in the US. The Republican House delayed the voting on the health care bill, which raised concerns if the Trump administration’s policies could face further delay in Congress and impede growth. Immediate support at 7,240, resistance 7,340.

Equities declined on delayed health care vote: Shares fell after the House of Representatives decided not to vote on the health care bill. President Donald Trump is optimistic on the repeal and replacement of Obamacare to proceed with other major plans like the tax reform.

Crude declined anew on continued rising US stockpiles: Oil prices dipped further as the rising US rig counts raise doubts whether the OPEC-led output cut deal is effective at curbing the global glut of oil. West Texas Intermediate (WTI) declined by $0.34 to settle at $47.70/barrel.

Bloomberry Resorts (BLOOM) reported a P5.7bn swing from P3.4bn net loss in 2015 to P2.53bn net income in 2016. This was on the back of 19% growth in gross gaming revenues at P38.54bn, with VIP volumes growing 29%, while mass table drop increasing 12% and electronic gaming machine coin-in registering 18% growth. On the other hand, non-gaming revenues increased by 26% to P2.38bn.

Aboitiz Power (AP) would be raising P30bn via bond issuance to finance its possible acquisitions and investments. The Board approved the issuance of peso-denominated, fixed retail bonds, in which offer price, tenors and terms and conditions have yet to be finalized. AP said the retail bonds will be registered under the shelf registration program of SEC.

Metro Pacific (MPI) unit, MetroPac Water Investments (MWIC) received the Notice of Award for the Cagayan de Oro (CDO) 100 MLD bulk water project, which approximately cost P2.8bn. This project, which has a term of 30 years, renewable for another 20 years, involves the acquisition and construction of a 100 MLD water treatment plant and the construction of new water transmission lines and rehabilitation of the Camaman-an Reservoir, to supply the CDO Water District.

Metropolitan Bank & Trust Co. (MBT) is setting up a medium-term debt program worth up to $2bn. This is intended to give the Bank maximum flexibility in accessing markets andallow it to maximize opportunities. MBT said the debt can be issued in different currencies including USD, PHP, Australian Dollar, Euros, Japanese Yen, British Pound or Chinese Yuan.

PXP Energy (PXP) increased its direct shareholding in Forum Energy Limited (Forum) from 48.8% to 69.5%, thereby increasing total direct and indirect stake to 77.5% from 67.5%. This was done through a subscription to 39,350,920 new ordinary shares of Forum at $0.30/share for a total consideration of $11.805mn. Forum is a UK incorporated oil and gas exploration and production company, which principal asset is a 70% interest in Service Contract 72 ‘SC72’, an 8,800sqm offshore petroleum license situated west of Palawan Island in the West Philippine Sea.

International Container Terminal Services, Inc. (ICT) has confirmed that it is participating in the bidding process for a 67% stake in Greece’s Thessaloniki Port. The Port has a market value of $211mn and a throughput of 344,277 TEUs.

Global Ferronickel (FNI)’s unit Platinum Group Metals (PGMC) is no longer included in the list of companies whose mines are “for suspension” or “for closure”. As per Department of Environment and Natural Resources (DENR) official website, there are now 4 companies for suspension while 22 companies are for closure.

CHP ties up with Sinoma Energy:

The national government reversed previous budget deficits and recorded a P2.22bn budget surplus for the month of January. The Bureau of the Treasury (BoTr) indicated that revenues for January reached P200.31bn, 10% higher YoY, while spending stood at P198.09bn. The BIR and Bureau of Customs collections reached P147.39bn and P35.94bn, respectively for January.

The BSP has trimmed its inflation forecasts for 2017-2018 citing ‘beneficial’ effects from the removal of tariffs on rice imports despite the prevailing upside pressures on general consumer prices. It now expects 2017 average inflation at 3.4% versus the 3.5% previous estimate. The 2018 forecast is also reduced a bit to 3.0% from 3.1%.

NEDA names 3 infra projects to be funded by ODA:

National Economic Development Authority (NEDA) said that at least 3 infra projects would now be funded by the official development assistance (ODA). The Investment Coordination Committee - Cabinet Committee (ICC-CC) approved the revisions in the funding of the Chico River Pump Irrigation Project. On a side note, NEDA said the ICC-CC approved a P2.5bn threshold for infra projects that must undergo a review before approval.

Energy Logics Philippines launched a 232MW integrated solar and wind energy project in Ilocos Norte. This would involve a 132MW wind facility in Burgos, Ilocos Norte and a 100MW solar plant in Pasquin, ilocos Norte. The firm tapped Qingdao Hengsun Zhongsheng Group Co. Ltd. of China as the engineering, procurement and construction (EPC) contractor. The $430mn project is expected to start this year, and would be completed within 18 months from groundbreaking.