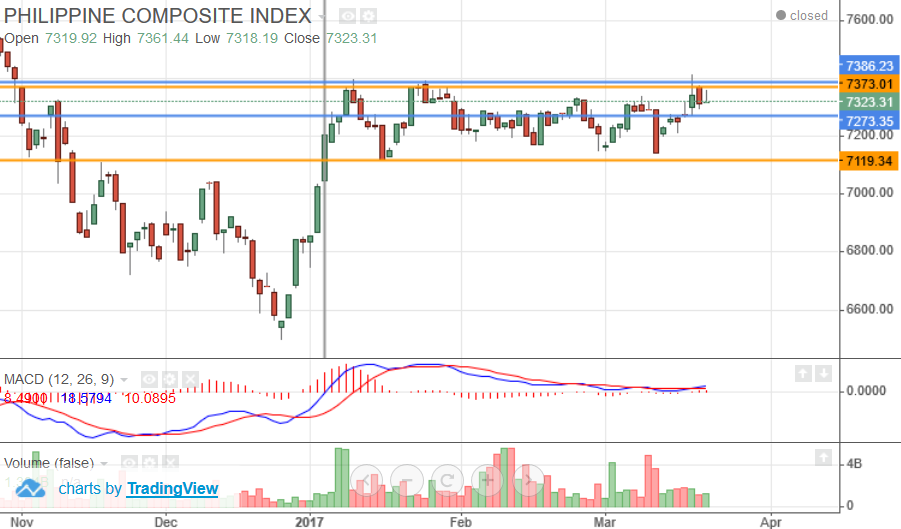 News Highlights: DMCI Homes, real estate arm of DMCI Holdings, Inc. (DMC) is allocating P12bn in capex for 2017, where P8.4bn will be spent on project developments, P3bn will be for land acquisition and the remaining will be used for improvements of existing buildings. Vista Land & Lifescapes, Inc. (VLL) reported a net income of P8.1bn for full year 2016. This was 13% higher YoY. Meanwhile, the Bureau of the Treasury (BoTr) reissued its five-year Treasury bonds (T-bonds) fetching higher yields as investors seek for better signals in the domestic and global markets.

Market breadth was neutral as gainers and losers were both at 98. Net foreign buying at P77.80mn. Poised for losses:

Local mart is poised for losses as sentiment is seen to be on a bearish note on the back of huge drops from Dow and Nasdaq yesterday. Falling crude prices will continue to be a concern as these reflect economic growth prospects of some countries. Immediate support at 7,270, resistance 7,370.

Marts closed broadly higher as investors sentiment improved, with Korea leading gains following the optimism over the impeachment and removal of Park Geun-hye.

Equities plunged as banks faced pressure from declining yields, while some investors focused on the upcoming key House vote. Financials dropped more than 2.5% to lead decliners. Meanwhile, House Republicans are expected to vote on repealing and replacing the Affordable Care Act on 23 March (ET).

Crude down on higher inventory data:

DMCI Homes, real estate arm ofDMCI Holdings, Inc. (DMC) is allocating P12bn in capex for 2017, where P8.4bn will be spent on project developments, P3bn will be for land acquisition and the remaining will be used for improvements of existing buildings. DMCI Homes is set to launch eight projects with 15,300 units and total sales value of P57bn. Recently, the group have launched two of its projects namely Prisma Residences in Pasig City and Mulberry Place in Taguig.

DMCI Holdings (DMC) off-grid power unit, DMCI Power Inc. grew its sales by 14% to 240GWh in 2016 amid higher power demand and dispatch across all cooperatives. Palawan registered the highest sales growth of 17% to 91.27GWh from the previous 78GWh amid increased economic activity and installation of a satellite plant in Brooke's Point.

MAXS to expand in Brunei and East Malaysia:

MAX’s Group (MAXS) signed a development agreement with YTT Sdn Bhd to put up at least 10 Yellow Cab Pizza stores in Brunei and East Malaysia within 5 years. This tieup now adds to MAXS’ total international pipeline of around 140 outlets set to open in the coming years.

East West Banking Corp. (EW) was able to raise P2.7bn from the issuance of its long term negotiable
certificate of deposits (LTNCDs). The LTNCDs carry a coupon rate of 4% and will mature in 21 Sept 2022. EW initially offered LTNCDs for the deposit base expansion and to support asset growth plans.

Premiere Horizon Alliance (PHA) is set to raise P300mn-P500mn 5-year redeemable cumulative preferred shares for the development of the master planned property of its unit West Palawan Premiere Development Corp. (WPP). This property, which is located along West Palawan corridor, is set to be developed into an ecotourism township. Earlier, WPP also purchased an additional 5ha. beachfront property in Nagtabon Beach.

Atlas Consolidated Mining and Development Corporation (AT) reported a consolidated net loss of
P879mn for 2016. However, upon the exclusion of the P495mn one-time provision for loss on tax credits, the underlying net loss is at P384mn or 53% improvement from 2015. Revenues increased by 7% to P12.08bn due to the higher volume of copper shipped and higher gold revenues, despite
lower copper prices. EBITDA also improved after registering 46% increase YoY to P3.174bn.

Streamtech Systems Technologies, Inc, a company owned by the Villar group, is venturing into the telecom business initially through the offering of fixed broadband service. The company applied for a congressional franchise last month to construct, install, establish, operate and maintain telecom systems nationwide.

The Bureau of the Treasury (BoTr) reissued its five-year Treasury bonds (T-bonds) fetching higher yields as investors seek for better signals in the domestic and global markets. Total tenders for the P15bn offering reached P26.6bn, with rates fetching an average of 4.132%, 10.2bps higher than the previous yield of 4.03%. The reissued T-bonds will have a remaining life of four years and ten months.

The Bangko Sentral ng Pilipinas (BSP) is open to ink more deals with banks among members of the ASEAN as part of the ASEAN Banking Integration Framework (ABIF). BSP is looking to close an agreement with two more ASEAN countries after signing a deal with Bank Negara Malaysia last 14 March.

Report from the Philippine Deposit Insurance Corp. (PDIC) indicates that deposits held by Philippine banks reached P10.5tn as of end-December or 13.9% higher from 2015 figures. Commercial banks deposits soared to P9.47tn, 14.4% higher YoY, while thrift banks grew their deposits to P874.8bn and rural banks deposits settled at P151.2bn. As of end-September, the five largest lenders that contributed P6tn in deposits are BDO Unibank, Inc. (BDO); Metrobank (MBT); Land Bank of the Philippines; Bank of the Philippine Islands (BPI); and Security Bank Corp. (SECB). Peso accounts were at P8.71tn, while foreign currency deposits reached P1.78tn.

PAGCOR is keen on the proposal to privatize casinos under its control. PAGCOR chief Andrea Domingo said the agency has yet to determine which of the 46 operating casinos would be sold. The outlook for the gaming industry in the Philippines remained bright especially with the change in the government, coupled with the sustained confidence of investors, and the level-playing field in the country.