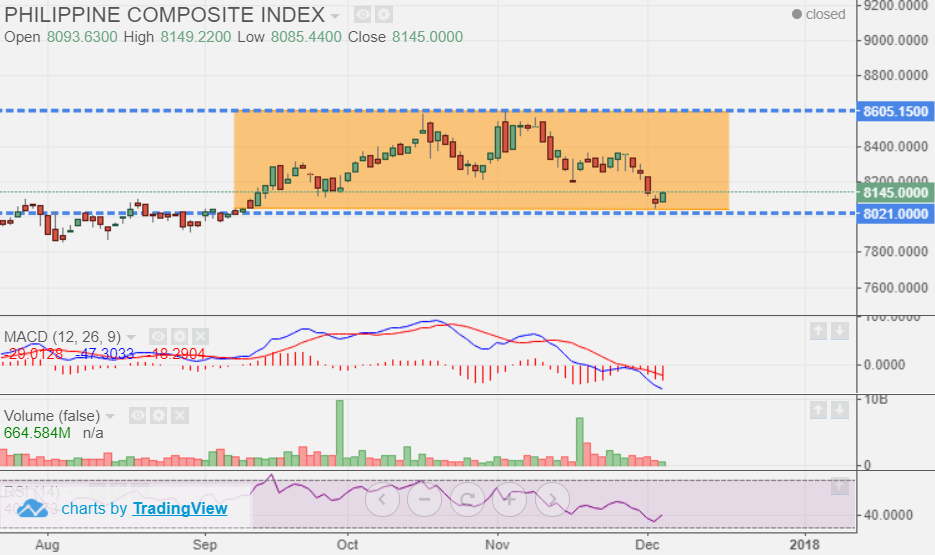 Good  time  for  bargain-­hunting:  We  might  see  a  continuation   of  yesterday's  buying momentum   as  investors   look  for  bargains   on  beaten  up  stocks  with  good  upside potential. Inflation remains on­‐target  and benign, which could prompt the BSP to keep rates steady throughout the year. Immediate support 8,080, resistance 8,250.

US Equities Fell: US equities fell with the surprise inclusion of alternative min. tax in the deliberation.

TEL’s PLDT Enterprise signed a partnership with Cignal TV to boost the latter’s signal in hospitals & hotels. Cignal is already included in TEL’s triple play offer& TEL has expanded its service to include enterprise clients.

Cebu Air (CEB) will integrate the P1,620 travel tax in its fares for tickets booked via its website & mobile application.

Data from the BSP showed  bank lending rose 19.9% in October, easing after rising for 4 straight months. Credit growth has been picking up pace, rising 18.7%, 19%, 20.4% then 21.1% respectively from May to September, prompting debt watchers and economists  to flag possible overheating  of the Philippine economy.

The PH gov’t is eyeing to get out of its trade deficit in five year’s time by attracting more manufacturers  to set up shop and significantly jack up domestic production, enabling the country to export more products.