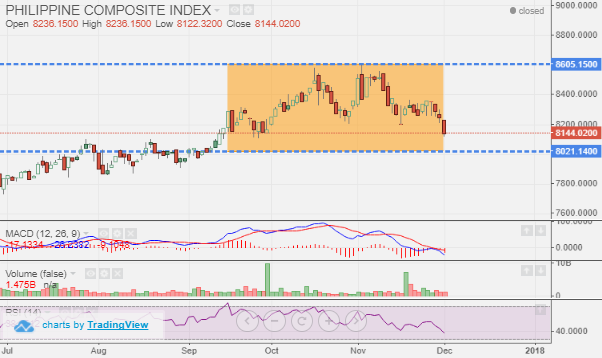 News Highlights:   Security and Exchange  Commission  (SEC) said the imposition  of P769mn fine on SMC for late penalty should send a strong signal to other listed firms on the need to adhere to comply with timely disclosures.  Globe Telecom,  Inc. (GLO)’s QR code-scan-to-­pay  feature for mobile wallet GCash has been made available in SM Investments  Corporation’s  (SM) SM Store. On the other hand, Inflation likely eased to 3.2% in November,  lower than the intra­‐year high of 3.5% in October,  due mainly  to more  stable  food  prices  during  the month,  as per the Department  of Finance  (DOF).  Wholesale  Electricity  Spot  Market  (WESM)  is also hesitating on passing the management of the power trading floor to the Philippine Stock Exchange (PSE) since it deals with a complex commodity.

Might see some recovery: Following prior session’s huge drop, bears and bulls are likely to continue exchanging hands before the market finds solid ground, though some recovery might be seen. Inflation remains steady and growth prospects are intact, so the correction phase may be temporary. Buy on dips and hold on to stocks with bullish capex rollout or 2018. Immediate support 8,050, resistance 8,300.

Asia  trades  mixed:  Asia trades mixed after US tax bill vote gets delayed.  Asia markets were mixed on Friday afternoon,  giving up some of the early morning  gains that came despite a positive lead from the U.S.

Shares lower: US equities scored lower Friday, after Flynn pleaded guilty to lying to the FBI  about contacts with  Russia's ambassador.   This  offset moves from Republican Senators who claimed they have enough support to pass a sweeping tax overhaul.

Crude oil prices rose on extended output cut: Energy prices were in focus in the Friday session after OPEC and Russia agreed on Thursday to extend their oil output cuts to the end of 2018. The deal to cut oil output by 1.8mn bpd was adopted last winter and the agreement was due to end in March 2018, having already been extended once.  West Texas Intermediate (WTI) climbed $0.96 to $58.36/barrel.

Security and Exchange Commission (SEC) said the imposition of P769mn fine on SMC for late penalty should send a strong signal to other listed firms on the need to adhere to comply with timely disclosures. SEC chair Herbosa was cited, ‘We cannot give exemptions & it does not matter what your intentions were, with or without bad faith. The laws must be followed, especially if late.’

Philippine Rating Services Corp. assigned a PRS Aa (corp.) issuer credit rating for BDO Leasing and Finance Inc. (BLFI) that indicates a strong capacity to meet its financial commitments relative to that of other Philippine corporates.

BPI’s glitch in June due to operational lapses:

Bank of the Philippine Islands (BPI)  glitch  incident  in  June  was  due  to  the  lapses  in  the  operations, according to the Bangko Sentral ng Pilipinas (BSP), wherein a programmer of the bank committed a mistake that resulted in the internal data processing error and incorrect balances were reflected in the accounts of depositors.

ABS­‐CBN  Corporation (ABS) reminded the public to stay away from all sites advertising complete episodes of ABS-­CBN TV shows and full features films online other than authorized sites like TFC.tv, ABS‐CBN’s official accounts.

AGF to transforn into real estate by ISOC Holdings:

ISOC Holdings will hold a tender offer to acquire 43% of AG Finance,  Incorporated  (AGF) minority holders.   The firm is owned by Michael Cosiquien  (chair of MWIDE).   ISOC plans to transform AGF into a real estate, energy or logistics firm, & is building a 2,412 sqm. cold storage facility.

ACR may venture into separate RES:

Alsons Consolidated Resources, Inc (ACR) may venture into a separate retail electricity supply (RES), but this will depend  on  its  distribution   utility  customers.     For  now,  rules  on  retail electricity  &  open  access  (RCOA)  are  not  applicable  to  Mindanao  until WESM is in place, which is seen by 2018.

Philweb Corporation (WEB) has received from the Philippine Amusement and Gaming Corp. (PAGCOR) the go-­signal to start offering e‐games.

Inflation likely eased to 3.2% in November, lower than the intra­‐year high of 3.5% in October, due mainly to more stable food prices during the month, as per the Department of Finance (DOF). This is still broadly in line with the government’s 2‐4% target range.

The Philippine manufacturing sector grew to 54.8 points from October’s 53.7 on expansions in output and new orders. According to Nikkei Philippines 50 points indicates economic expansion,  while a reading below 50 points toward contraction.

SEC to release the draft of rules against crowdfunding:

Securities & Exchange Commission (SEC) is set to release the draft of SEC Rules and Regulations Governing Crowdfunding for public exposure and comment.

WESM not in favor of PSE takeover:

Wholesale  Electricity  Spot Market (WESM)  is hesitating  on passing  the management  of the power  trading floor to the Philippine  Stock Exchange (PSE) since it deals with a complex commodity.

As per a survey from the BSP, more companies are putting on hold expansion plans as well as the hiring of additional  workers  for 1Q18 due to the post­‐Christmas holiday blues as well as stiffer competition.  Percentage of businesses with expansion plans in the industry sector for 1Q18 slipped to 31.1% from 32.8%.