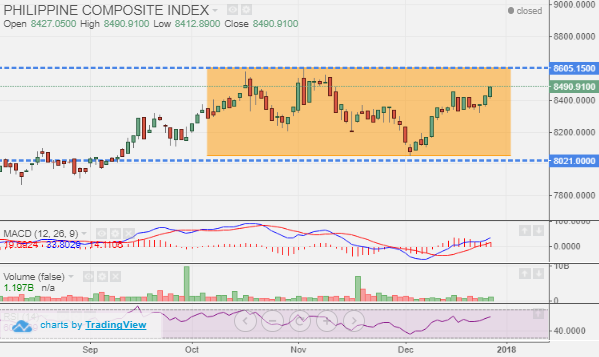 Soft session likely to continue. Light session is seen, with several fund managers on their holiday break. Second-tier shares & those with positive stories might stir interest among locals, specifically punters. Steer clear from issues that have no prior liquidity track, as the zest could wane once euphoria fans out. Immediate support is 8,400, resistance 8,530-8,550.

Mart ended higher: Asian markets ticked on the plus side despite lack of leads, with lead gainers primed by South Korea & Indonesia. Malaysia’s bourse also trended up, a session after its 3-day winning streak.

Oil ended slightly lower: Oil futures paused for technical breathers, following its recent ascent as a result of the pipeline explosion in Libya. WTI slipped $0.33 at $59.64/barrel in Nymex.

Metro Pacific Investments (MPI) initiated talks with possible partners from Japan for an LNG terminal & power plant, according to PowerGen CEO, Rogelio Singson. However, no firm agreement has been signed yet. In recap, MPI & Osaka Gas of Japan expressed interest for an integrated natural gas facility that will involve gasification & set up of power plant with capacity of 1,500MW.

Pilipinas Shell Petroleum (SHLPH) clarified to the Exchange they have no intention to set up a real estate firm in 2018 & they are not directly participating in renewable energy.

NIKL approves to increase the firm equity in EPI :

Nickel Asia Corporation (NIKL)’s board approved to increase the firm’s equity in Emerging Power, Inc. (EPI) to 91%, following the conversion of advances amounting to P1.5bn. The move is subject to SEC approval.

Golden Haven Memorial Park’s (HVN) board approved the purchase of Bria Homes, Inc. from Cambridge Group for P3.014bn & parallel issuance of 150mn common shares of HVN to Cambridge for the same amount, or P20.0935/share. The issuance is in line with shareholders’ approval last 16 Oct. 2017, for the issuance of 150mn shares via private placement. Completion of the share issuance is on or before 10 Jan. 2018.

MRC Allied, Inc. (MRC) plans to partner with electric cooperatives for off-grid areas with capacity need of 1MW. The plan covers building generation plants using hybrid of solar & other technologies, & coop participation might be limited to the land where the power plant will be built.