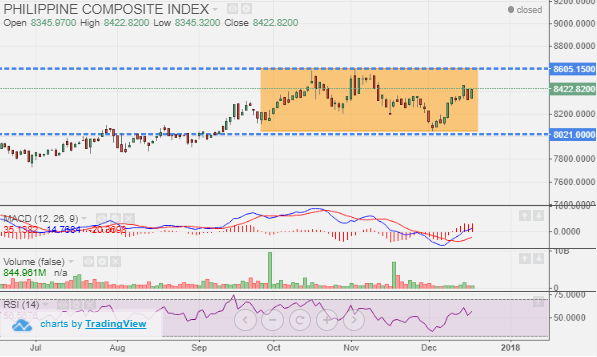 Might  trade  higher  albeit  thinly:  Mart  might  continue  to  push  higher  today  as  the President is expected to sign the TRAIN bill into finality as well as the 2018 national budget, though trading will likely be soft as some investors would opt to hold on to bargain stocks until year-­‐end. Immediate support 8,350, resistance 8,500.

Marts mixed: After a flurry of central bank activity last week – the Federal Reserve raised interest rates but the Bank of England and European Central Bank made no changes to monetary policy – the Bank of Japan steps up this week to lead gains within the region

International  Container  Terminal Services, Inc. (ICT) confirmed its interest to acquire 65% of Evyapport, the 4th-­‐biggest in Turkey. ICT is still in the stage of conducting due diligence for the port. Evyapport has an estimated capacity of 855,000 TEUs.

AEV’s   Aboitiz Construction is discussing with SEPCO3 & DEC for partnership:

Regardless of results from a possible tie-­up with China Telecom, Philippine Telegraph and Telephone Corporation (PTT) will tap wireless telco & networking technology provider, Chengdu Outwitcom, for its planned network expansion  & Ruijie Networks as supplier.  PTT aims to spend $200mn while the Chinese firms will invest $200mn.  Chengdu Outwitcom provided the Wi‐Fi  service  in the outdoor  areas  of CCP during  the ASEAN  summit  last month.

PAL  gets its clearance from SEC:

Raul Lambino rationalised the grant of master licensor agreements with First Cagayan Leisure & North Cagayan Gaming & Amusement Corp., after the latter agreed to cancel their operations in Metro Manila & return to Cagayan Special Ecozone.  Lambino said the move would allow the entry of new players & help them build on new infrastructure in CEZA.