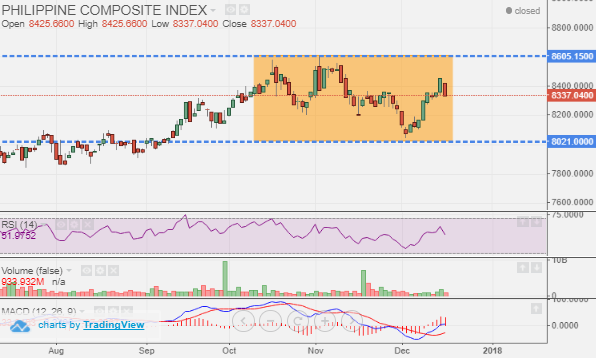 News Highlights:   : Starting Jan 2018, Maynilad’s  water rate will rise by P0.97/cubic  meter (cu.m.) to P34.51, to cover its CPI adjustment.   This covers 2.8% of the P34.51/cu.m. average basic charge in 2017. Aboitiz Equity Ventures (AEV) plans P40bn-­‐P50bn capex for 2018, P13bn of which will finance the Apo-­‐Agua full renewable energy-­‐powered water treatment project. On the economic front, the Department of Finance (DOF) expects Congress to approve early next year additional provisions to be included in the tax reform bill, which will plug the shortfall in revenues to be generated by the recently ratified tax measure.

Mart might recover: Mart might recover from prior session's sell­‐off as inventors could use this opportunity to look for bargains, especially on stocks likely to benefit from the TRAIN  and  the  massive  infrastructure  program.  Immediate  support  8,300,  resistance 8,450.

US shares bounced back: US shares gained Friday, primed by consumer staples, after the tax overhaul plan cut corporate taces from 35% to 21%.

MGen in discussion with ESB International to be the operations and management partner:

Meralco Powergen (MGen) is discussing with ESB International, a wholly-­owned firm by the Electricity Supply Board of Ireland, to become its operations & management (O&M) partner for the Atimonan  One  Energy  (A1E)  plant.The  P135bn  project’s  completion  is targeted late 2021, with financing component  at 70%, 30% equity.

Cebu Air (CEB) has renewed its insurance cover with Pioneer Insurance.   Pioneer meanwhile, has appointed the UK arm of Marsh, as its reinsurance broker.

SLF’s current president will be appointed as EVP:

Udenna  plans  to list its leisure arm, Lapu-­‐Lapu Leisure Mactan, in the future, to finance its $341mn integrated resort & casino venture in Cebu.   This project covers 12.5ha. beach‐front  lot in Mactan Island.  There are plans to engage Enderun as management  partner

MJC Investments Corporation (MJIC) appointed Jeffrey Rodrigo L. Evora as its new COO effective 14 Dec. 2017. Evora has over 20 years experience in mega-­resort casino operations in the US & Phils.  He was previously  the Dir. of Gaming Marketing  at RWM prior to his appointment.

The Bangko Sentral ng Pilipinas (BSP) expects sustained growth in foreign direct investment (FDI) inflows as well as lower outflow of foreign portfolio investments in 2018 on the back of the country’s  strong macroeconomic fundamentals  and the ramp up of infrastructure  investments.  The BSP specifically  eyes FDI inflows inching up 2.5% to $8.2bn in 2018.

The Department  of Finance (DOF) expects Congress to approve early next year additional provisions to be included  in the tax reform bill, which will plug the shortfall  in revenues to be generated by the recently ratified tax measure. The Tax Reform for Acceleration and Inclusion (TRAIN) Act has been divided by the Congress into  package  1A  and  1B,  the  latter  of  which  will  be  discussed  in  1Q18. Package 1A constitutes the measures ratified by both chambers of Congress,   while  the  remaining   Package   1B  involves   the  proposed   tax amnesty program, adjustments in the Motor Vehicle Users Charge, and amendments  to the Bank Secrecy Law.

The Exchange is hoping that the SEC will finally allow it to merge with the fixed income bourse by the 1Q18, or even before the end of 2017. PSE’s compliance with the 20% ownership cap is   one   of   the   conditions    imposed   by   the   Securities   and   Exchange Commission  before allowing it to acquire PDS Holdings Corporation  and its merger with the Philippine Dealing and Exchange Corporation, the country’s fixed income bourse.

The Chamber of Mines of the Philippines  and its members tomorrow  will ink an agreement  with the Mining Association of Canada.

Asian Development Bank (ADB) has raised the funding for its microfinance guarantee and risk-­‐sharing program by an additional $100 million. Under the program, ADB selects partner finance institutions that provide wholesale local currency loans to ADB-­‐approved MFIs. ADB then assumes up to 50 percent of the default risk arising under loans made by these financial institutions to MFIs, having a maximum tenor of three years.