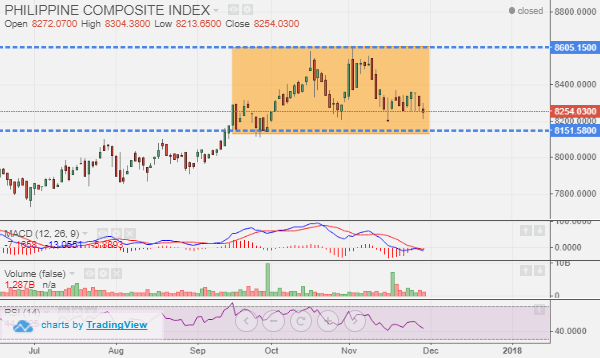 Might teeter sideways: Mart might start the month on a good note following optimism from Wall Street and upbeat expectations before year-‐end, though some investors might continue to hold on or cash-­‐in  on gains made since the beginning of the year where the benchmark was doing below 7,000 points. Immediate support 8,170, resistance 8,350.

Tech  shares  tumbled  down:   Most Asian markets closed lower on Thursday as oil prices firmed after falling in the last session. Tech stocks in the region declined after US shares in the sector sold off on Wednesday. Investors in the region also digested  the official manufacturing PMI data out of China.

Shares  lower  on  No.Kor  jitters: Asian bourses closed broadly lower on Wednesday after North Korea launched another test missile near Japan’s waters, claiming it could reach the US mainland.

Dow  closes  at  record-‐high:  US  equities  crossed  above  24,000  for  the  first  time  on  strong indications the tax cut plan will get enough support for passage.

Tech  stocks  sold  off  as  financials  rose: The Dow Jones industrial average closed at a record high as investors focused on momentum in the U.S. economy. The second estimate for third-­‐quarter GDP was revised to 3.3% from 3%. It was also above the 3.2% expected by markets.

Prices  lower  on  uncertainty:  Markets  expect  an  agreement  between  oil  producers  to  be extended, but some are concerned about Russia's commitment to extend those cuts. West Texas Intermediate (WTI) shed $0.40 to $57.30/barrel.

Emperador  Inc. (EMP)  will issue 122.4mn new common shares to Singapore-­‐based Arran for P832.3mn (or P6.80/share)  under its Equity Linked Securities  (ELS) accord.   The amount will cover accrued interest under the ELS.

Metro Pacific Investments (MPI)’s MPCALA Holdings  aims to sign the P7.2bn contract for the Cavite segment of  Cavite-­‐Laguna  Expressway   (CALAx)  early  2018.    This  will  start  from Cavitex & end at SLEx-­‐Mamplasan.  Completion is slated 2020.

MG to raise its authorized capital to P10bn:

Phoenix  Petroleum  Corporation (PNX) made a soft opening  for its Singapore  office for a full trading outfit. This will handle direct dealings  with refineries  & cut out middlemen.   PNX aims to install 30­‐50 new retail stations in 2018 from its present 500.

Before the year ends, the Department   of  Transportation  (DOTr)   intends   to  bring  back  Japanese groups  Sumitomo  Corp. and its technical  partner,  Mitsubishi  Heavy Industries, who used to be involved in the Metro Rail Transit Line 3 (MRT3) construction and design 18 years ago in a bid to resolve breakdowns that disrupt the journey of thousands  of commuters on a near-­‐daily basis.

Latest  data from the Bureau of Treasury showed the gov’ts outstanding  debt reached a record­‐ high of P6.501tn ending the first 10 months, driven by weaker peso.

the Department of Trade and Industry (DTI) is raising its target for the growth of the manufacturing sector starting next year to 10% in 2017 and 11% after, from earlier forecast of 8-­‐10%

Metal  production  rose  6%  to P81bn in the first nine months  of the year primarily  due to the increased metal demand of China, as per the Mines and Geosciences  Bureau (MGB).

House panel eyes expanding its investigation after lawmakers discover the lack of strict measures on the personal investments  of officers.