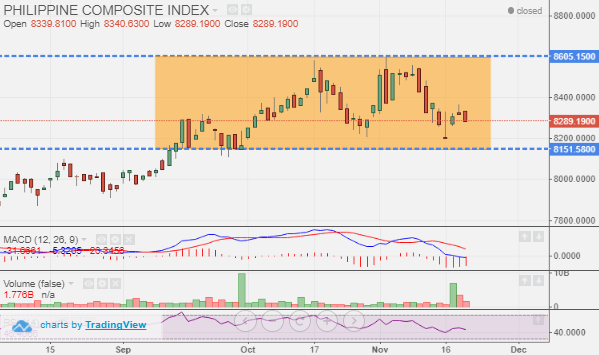 Might  trade  higher. Mart might trade higher today after prior session’s decline, which could be good buying windows for stocks that would benefit from higher seasonal spending in Q4. The President’s vocal opposition against lifting the ban on open­‐pit  mining would likely affect mining stocks, which would put some downward pressure on the market. Immediate support 8,200, resistance 8,360.

Shares  climb  ahead  of  Thanksgiving:  US  stocks  rose  lifted  by  Verizon,  while  a  deal  in semiconductors lifted high-­‐performing tech shares. No major earnings or economic data scheduled for the week, trading volumes were thin and expected to get even quieter leading up to the Thanksgiving holiday on Thursday and an early market close on Friday.

San Miguel Corporation (SMC)’s  San Miguel  Brewery  will go through  consent  solicitation  from 22 Nov­‐14 Dec. for holders of Series C bonds due 2019, Series E due 2019 & F notes due 2022, for changes in trust agreements with the planned F&B consolidation.

Maynilad sought for provisional water tariff adjustment to stagger the impact of the rate hike to cover  their P3.4bn  indemnity  claim.  The Department  of Finance  (DoF) needs to review this matter & will still be subject to further meetings. Maynilad is 53%-‐owned by MPI, 25% DMC.

SBS Philippines  Corporation  (SBS)  will form  65%­‐owned  Lence  Holdings  for  its  foray  into  warehouse  facilities. Lence will be capitalized at P137mn & will acquire warehouse complexes.

SEC wants Calata Corporation (CAL) to register its CalCoin plan before it could list on a crypto currency exchange.  SEC said this applies to other jurisdictions that consider digital coins as securities.

Pres.  Duterte  will reject the recommendation of the Mining  Industry  Coordinating  Council  (MICC) to  lift  the  ban  on  open-­‐pit  mining,  as  there  are  no  proposed environmental corrective measures.

The Securities & Exchange  Commission  (SEC)  approved  raising  the  minimum  required public float from 10% to 20% for firms listing in the Exchange. Meanwhile, SEC  has  yet  to  decide  on existing  listed  firms’  compliance,   possibly  by 1Q18.

3­‐in­‐1 coffee mixes excluded from SSB: