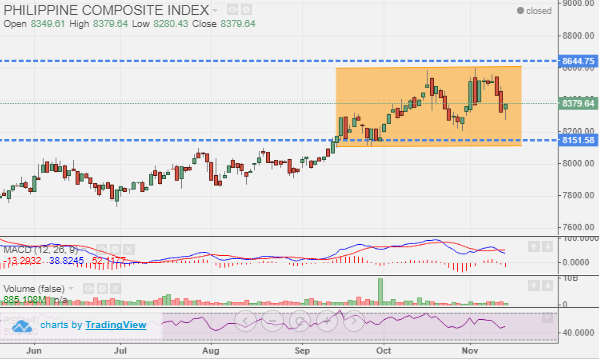 Mart  to  test  strength: Mart might test its strength again after falling below the 8,400 mark as Wall Street continues to show signs of weakness, though some upward pressure might come from investors  using the run-­‐down  as buying opportunities  for stocks with good potential. Strategic developments from the ASEAN Summit could also help bolster the market. Immediate support 8,300, resistance 8,470.

Shares  tumble: Asian bourses were mostly lower on Tuesday tracking weakness from Wall Street. Investors also digested China's economic data on the slowdown of industrial output and investment growth in the 10-­‐months period of the year.

FDC-­‐JGS are bidding for long term development of Clark Airport:

SM Investments Corporation (SM) plans to expand in the region over the next 5 years – Singapore is eyed for its bank, other areas for malls.

PAL Holdings Inc. (PAL) will establish a nonstop flight between Manila and New York which will happen probably in third quarter of 2018, according to PAL President Jaime Bautista. The company is also looking for new routes into the United States like Chicago and Seattle.

Philippines moves up to 4th place in ASEAN FDI:

Philippines  attractions  of foreign direct investments  (FDI) ranking moved up to the upper half of the 10-­‐country  Association Southeast Asian  Nations  (ASEAN). The  country considered as the fourth largest recipient of FDIs in the region in 2016 with $7.93bn data from ASEAN.

the Department of Finance (DOF) said yesterday that China has pledged an estimated $7.34bn in loans and grants to the Philippines for the implementation of the government’s flagship infrastructure projects and other priority programs.

New Zealand to give aid to Mindanao Farm sector:

To support agricultural development  and food security in Mindanao,  New Zealand has earmarked $2.5mn which is seen to benefit at least 3,000 farming households or about 15,000 people in conflict-­‐affected areas in the region.

By 1Q18,  Bangko  Central  ng Pilipinas (BSP) said InstaPay (via PesoNet) will process real-­‐time fund transfers (ETFs) across banks & e-­‐wallets so long as transactions  are worth less than P50k.