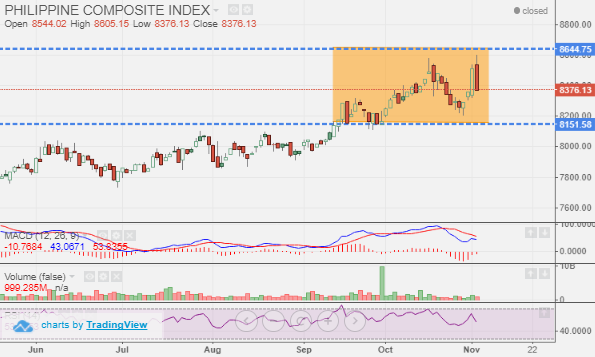 Earnings  in  focus:  Mart  could  use  prior  session's  run  down  as  a  buying  window,  with  focus  on 9M17 or Q3 earnings disclosures as they come. Downward pressure might come from some who would opt to cash in on their gains as they reposition their portfolio this week. Immediate support 8,300, resistance 8,475.

Shares mixed: Shares ended mixed on Friday as bourses struggled for direction following a lack of movement from US shares. South Korea and Hong Kong led gains in the region.

Shares gained on jobs growth: US shares gained on Friday as US jobs data for October added the most workers in a year and jobless rate fell to its lowest since 2000 -­‐   a rebound from September's slowdown amid hurricanes Harvey and Irma.

AC to export motorcycles to Thailand:

Manila Electric Co. (MER), through  wholly-­‐owned  MSERV,  and  Mitsubishi  Motors  Philippines  Corp. are teaming up to put up more electric vehicle (EV) charging stations in selected offices of the Department of Trade and Industry (DTI) and Department of Environment and Natural Resources (DENR).

Cebu Air (CEB) is reviewing its fuel hedging  policy,  with  the  possibility  of  moving  completely  away  from  it, taking cue from American and Chinese airlines who did better without it historically.  CEB also lost roughly $40mn a few years back on a bad hedge.

ABS­‐CBN Corp. (ABS) and GMA Network contest their leadership in TV ratings, with ABS maintaining leadership   in  nationwide   ratings   and  GMA  in  urban   households.   ABS claims  it had  an  average  national  audience  share  of 46%  in October  vs. GMA’s 33%. On the other hand, GMA said it had a higher average total day audience share of 41.7% in October, vs. ABS’s 38.1%

Atlantic, Gulf and Pacific Company (AG&P), 27%‐owned  by A. Soriano Corporation (ANS), bagged the set-­‐up of $200mn liquefied natural gas (LNG) import terminal on India’s Karaikal Port.  This sea­‐to‐land structure is set for completion mid-­2019, and AG&P will secure an initial supply of 1mn tons of LNG per year vs. total capacity of 10mn.

Austrian trader Alfred Reiterer, who represents about 14% voting rights for small shareholders of Calata Corp. (CAL), is asking the Exchange (PSE) to reconsider its plan to delist the agricultural  products  distributor  so they could  gain control  and hire a new management.

BSP issued Circular 979, assigning lower risk weight of 20% (from the present 75%) on performing loans to micro small & medium enterprises (MSME) as long as these are guaranteed by  a  qualified  credit  surety  fund  (CSF)  cooperative.    This should improve credit line to MSMEs. (Note: Overall impact on NPL & provisioning  minimal,  with  MSME  share  to  total  lending  (net  of exclusions), at 7% or P529bn)

The   National Economic and Development Authority (NEDA) is pushing for the implementation of a single window approach in the processing of business permits to enhance ease doing business in the country.

The Department of Finance (DoF) proposed  a flat 8% tax on self-­‐employed individuals  & professionals on gross sales, or schedular personal income tax with allowable deduction. Meanwhile,   VAT  threshold   for  this  category   will  also  be  raised   from P1.9mn to P3mn, exempting small businesses with total annual sales of P3mn & below from paying VAT.

SSS is studying the feasibiity of offering unemployment insurance based on their pending reform  act.   The plan is to do this via a tie-­‐up w/ private  insurance  firms, on the condition the unemployed has no fault on their own.   This is in anticipation   of  the  rising  use  of  AI  or  artificial  intelligence   to  perform human functions.

SEC submitted for congressional approval  proposed  changes  to  the  Securities  Regulation  Code  (SRC)  to fast-­‐track its full membership  in IOSCO, a global association  of securities & futures market regulators.   Instead of changing the bank secrecy law however,   SEC  proposed   to  look  into  bank  accounts   only  if  there’s  an ongoing probe.