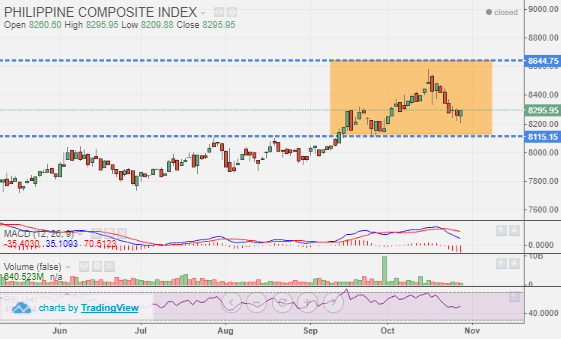 Marts mostly up: Japan stocks led gains in the Asian region boosted by a decline of the yen against the dollar, while the Hong Kong benchmark rose after underperforming

Petron Corp. (PCOR) filed a case before the Ombudsman against the Philippine National Oil Company (PNOC) chief Reuben Lista for an alleged 'unexplained wealth'. This is on top of the earlier case filed for breach of its compulsory sale-­‐leaseback contract with PNOC

Philippine  Airlines  (PAL) sees losses for 2017 with its P6bn payment to gov't for unpaid navigational fees & the firm plans to secure loans from local banks. Despite this, PAL plans  to submit  its unsolicited  proposal  for  NAIA-­‐2  expansion  by end  of 2017, with planned  spending  at $350mn-­‐$450mn. PAL is also scouting  for a partner that would take 25%-­‐30% equity. PAL is also looking for possible partners for airport operations,  possibly within the Lucio Tan Group (LTG)

RCB clarifies it is not for sale:

Rizal Commercial Banking Corp. (RCB) is not in talks with BDO or BPI Banks on rumored sale of the bank.

Araneta Properties (ARA) plans to transform 140­‐ha. in Caloocan into a central business district and funding options  are  being  reviewed.  This  project  is  on  top  of  its  340ha.  lot  in Bulacan called Colinas Verdas in joint venture with Sta. Lucia Land, Inc. (SLI)

BRN ties up  with Rebisco on  hydropower:

A  Brown  Company  (BRN) confirmed hydropower projects that will be undertaken via subsidiary, Hydro Link Projects Corp., through a tie-­‐up with Rebisco Group.

Pacifica  Inc.  (PA)'s  board  approved   the change in primary purpose to a holding firm + inclusion of 'power to guarantee' as part of its secondary purpose. Par value to be raised from P0.005 to P1/share, then increasing authorized capital from P200mn to P5bn.

The country’s outstanding debt reached a new record high of P6.444tn at the end of September,  +5.9% y‐o­‐y, as per data from the Bureau of the Treasury.

BSP will not suspend clearing and settlement  on Nov. 13­‐15, but no clear announcement was given whether foreign exchange (forex), bond trading and open market will go on regular operations  for the said dates.

BOI approves P35bn worth RE projects:

The Board of Investments (BOI) has approved 4 Renewable Energy (RE) projects worth P35bn. 3 of these projects were of Currimao Solar Energy Corp., while the other project was that of VS Gripal Power Corp.

Based  on  data  from  the  Philippine Statistics Authority (PSA), the Philippines’ self-­sufficiency in rice improved to 95% from last year’s 88.9%