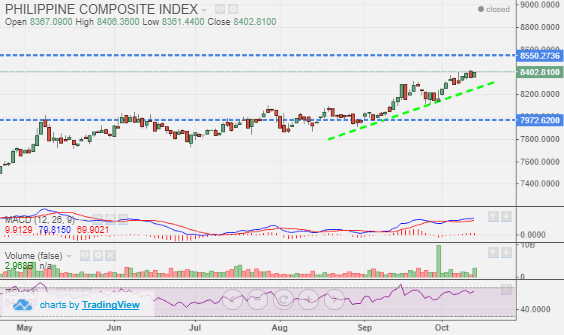 News Highlights: TEL will make an initial P500mn investment in the new Asia-Africa-Europe Submarine Cable System (AAE-1) which will be launched before end 2017. The facility will make TEL's total international capacity at over 4 Terabits per second (Tbps).

Market end mostly up: Marts extended their gains as its taking cues from fresh overnight records set by key U.S. indexes as the earnings season kicks off.

US Market ends slightly lower: US mart paused for breather as big banks kick off earnings season and initial weekly jobless claims fell by 15,000 to 243,000.

Oil prices fall: Price fell Thursday after the International Energy Agency reported a monthly rise in global crude supplies. However it finished off the session’s lows as a U.S. government report showed that domestic crude stockpiles fell for a third week in a row.

PLDT, Inc. (TEL) will make an initial P500mn investment in the new Asia-Africa-Europe Submarine Cable System (AAE-1) which will be launched before end 2017. The facility will make TEL's total international capacity at over 4 Terabits per second (Tbps).

First Gen Corporation (FGEN) purchased some notes at the market based on its Reg S US$300mn 6.5% fixed rate notes due 2023 which are listed on the Singapore Exchange Securities Trading Limited (SGX). No other information is added.

MWC signed a deal with Obando:

Manila Water Co. (MWC) signed a 25-year concession agreement with Obando Water Company and the Obando Water District (OWD) for the design, construction, operation & management of water facilities and provision of water and sanitation services for the Municipality of Obando.

BRN approved conversion of debt and deposit to subscriptions:

A Brown Company (BRN) approved the conversion of its debt and deposits amounting to Php 450mn to future subscription at Php1.13/share for the purpose of settling outstanding loans, convert deposits and strengthen the Balance Sheet.

Philippine Telegraph and Telephone Corporation (PTT) is eyeing possible partners such as China Telecom, India's Jio or a player from Mexico. PTT hopes to receive clearance from PSE to lift its 13-year trading suspension in the next 3 mos.

The Department of Finance (DOF) is proposing a budget of P2bn in 2018 for the fuel marking scheme as part of efforts to curb as much as P40bn in tax leakages cause by the smuggling of oil into the country.

Through the Joint Foreign Chambers (JFC), foreign businessmen are voicing concerns over House Bills 2165, 2915 and 3229, which will ban the export of iron, nickel, chromite, manganese and other strategic metallic ores.

The Department of Trade and Industry (DTI) is considering perks to boost local production of special purpose vehicles (SPVs) in addition to the lineup of incentives for eco-friendly public utility vehicles (PUVs). SPVs include heavily-imported vehicles such as ambulances, truck-mounted cranes, and mini fire trucks.

Lazada aims to widen distribution to 50 centers in 2018 & will use electric bikes (e-bike) to handle the delivery in Metro Manila.

Home Credit Phils. got Php2.25bn loan from 5 banks to support lending operations. The firm is looking at P12bn loan receivables by end 2017.