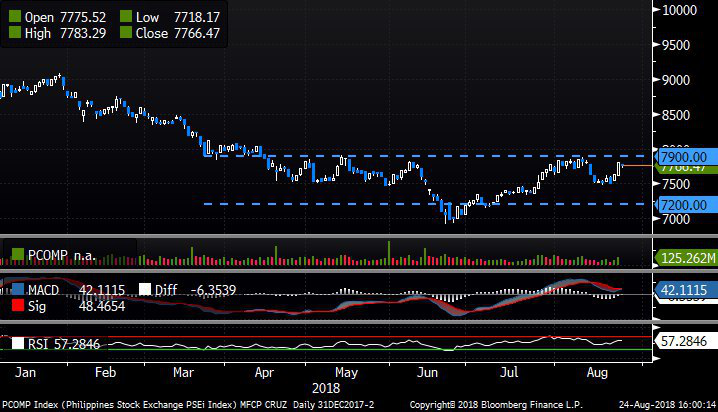 Upward thrust: Market players might cheer the latest US-Mexico accord, that could pave the way for a renegotiated NAFTA deal. The move is seen to generate $1.2tn in annual trade among US, Mexico & Canada, especially after ironing he contested sunset clause provision. Large caps in infra & property might lead, along with sector prospects in energy exploration & 3rd telco. Immediate support is 7,750, resistance 7,830-7,850.

Ended higher: Asian stock markets gained on Monday, aided by China’s efforts to support the yuan which is seen to control both outflows from the stock market amid continuing U.S.-China trade disputes.

Cal-Comp Tech. (Phils) of Taiwan’s New Kinpo Group (NKG) is holding talks with SM Group for the supply of New Era AI Robotics. The proposal covers smart ‘humanoid robots’ with voice interactivity, facial biometrics & POS systems. No official statement has been given by SM on the matter.

SM Investments Corp. (SM)’s partnership with The Walt Disney Co. will not only focus in marketing the brand, but cover theatrical promos, real & special activities, esp. on films. Disney contributes 50% of the overall character brand sales in SM malls.

Filinvest Land, Inc. (FLI) will build 6 mid-rise office towers for 3.6a. WorkPlus complex in Mimosa+Leisure City in Pampanga. The 1st building had been completed with 8,410sqm. GLA. The next 5 towers are slated for completion in 2021, bringing GLA to 101k sqm. FLI will also develop residential units on 2.74ha. LodgePlus for WorkPlus employees at 438 units. This will be completed 3Q19-1Q20. LodgePlus lease rates is P5k for each bed space, P30k for an entire unit, & P750k for an entire floor with 25 units.

GT Capital Holdings, Inc. (GTCAP)’s Federal Land will unveil 9 to 11 projects for 2018,of which 3 have been launched 1H. The 2H projects will be Grand Hyatt 2 in Bay Area; another tower in BGC & Taft Ave., Pasay City. Federal Land will also redesign the podium for The Big Apple Mall in BGC that would bring 20,000sqm. additional GFA.

Vista Land & Lifescapes, Inc. (VLL)’s Camella will introduce CondoHomes (COHO) in Davao City that would have a mall, All Day Supermarket, Bake My Day & Coffee Project. Groundbreaking for the 1st COHO Terraces in Ma-a is 4Q18, on 1.8ha. lot. There will be 5 buildings with 486 units with construction start date in 2Q19.

San Miguel Corp. (SMC)’s P736bn New Manila Int’l. Airport in Bulacan will provide as many as 1mn jobs during construction phase. SMC already submitted a ‘revised concession agreement’ plus risk allocation matrix to DoF & NEDA, after which DoT will start negotiations with SMC for the draft concession accord to be submitted to NEDA-ICC.

IRC Properties, Inc. (IRC) chair Tony Tiu said the $3.7bn Makati Intra-City Subway project aims to break ground this Dec. The subway will have up to 10 underground island stations with up to 6 car trains at 200 persons per car. It would also have links to other mass transport systems such as MRT, Pasig River Ferry. Tiu also said 4 state-owned firms from China are interested to do the engineering, procurement & construction (EPC). The project will cover 10 stations connecting city hall, poblacion heritage site, Univ. of Makati, Ospital ng Makati, among others. IRC recently applied for an increase in its authorised capital from P1.5bn to P19.5bn.

No final offer yet on FB follow-on float:

San Miguel Corp. (SMC) clarified to the Exchange that no final pricing has been set yet on San Miguel Food and Beverage, Inc. (FB)’s follow offer, but stated pricing would be ‘up to P140/share'. Based on FB’s preliminary prospectus, pricing & allocation of offer shares was set 19 Oct., while public offer will run 23-29 Oct. 2018.

AgriNurture, Inc. (ANI)’s The Big Chill will list by way of introduction to raise up to P2bn. Funds will be used to finance the firm’s regional expansion. After listing, ANI is looking at a private placement to raise P1.5bn-P2bn & they will look for partners for franchising. ANI aims to list the unit before the end of 2018.

Upon Philippine Telegraph and Telephone Corp. (PTT)’s rehab exit, the firm aims to raise capital to support expansion through a relisting in PSE. The firm is also talking to a foreign investor to boost its bid for the 3rd telco slot. No other details were given.

S&P maintained its 6.7% GDP growth for 2018 for the Phils. despite the slowdown in 2Q GDP. S&P cited continued growth in consumption & investment, among others.

DoE set meetings with interested firms joining the roadshow for the upstream petroleum sector. This includes OV & PXP. DoE will also hold roadshow presentations at the Phil. Embassy in Singapore. Around $2.4bn is seen for 14 pre-determined areas that includes 4 areas in West Luzon basin; 3 in East Palawan; 2 in Cotabato, among others.

WESM is looking at digital tokens for its future marketing trading portfolio. This would enable ‘tokenising' the buying & selling of kWh of power commodity. Siemens of Germany has been advancing on this sphere with Lo3 in the US.

Ethanol producers sought an audience with DoE after independent oil firms called to suspend the Biofuels Act of 2006. Members of the Centre for Alcohol R&D (CARD) said biofuels is about rural dev’t. & diversification of the sugar industry. CARD said P3bn-P5bn has been spent by bioethanol investors for a distillery capacity of 100k liters/day.

Investment plan for Boracay being prepared:

NEDA is preparing an investment program after Boracay’s 6-month rehab. This will cover public sector investments. Boracay is set to open 26 Oct.

Alphaland of Roberto Ongpin is evaluating investment offers from Thailand & China. The firm’s 1H net income was up P3.36bn from P781mn due to improving rental income from Alphaland Southgate Tower & Corporate Tower in Makati.

Iglesia ni Cristo's (INC) telecom franchise has been extended for another 25 years by the House of Representatives. The measure has been submitted to the Senate. INC uses its private telco network to serve its proselytisation.

Tech start-up Investagram plans to launch InvestaTrade for its trading platform around 1Q19. The firm still needs to raise P100mn min. paid-up capital & is looking into crowdfunding, or partnering with an existing brokerage firm.