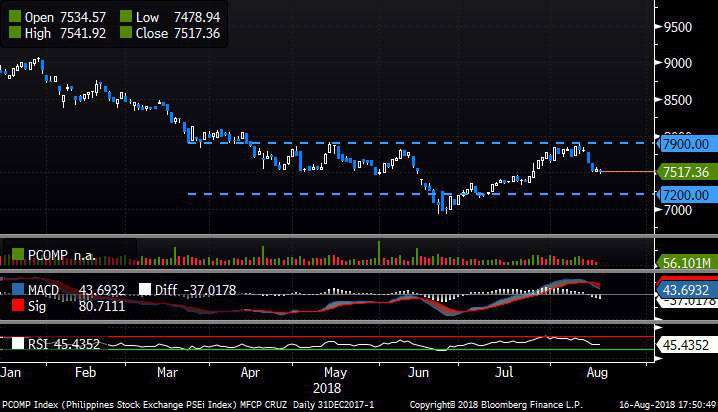 Trade tariff gridlock weighed on sentiment, PSEi @7,517: Participants gave more weight to overseas headlines, specifically on Turkey’s retaliation against the US & sequels to China’s move to seek WTO’s aid on the legality of US trade policies. The PSEi fell 23 points at 7,517 (-0.31%), after falling to an intra-day low of 7,479. Industrials fell most (-0.98%) while financials gained (+0.15%). PGOLD (-P0.10 at P44); SMPH (-P0.30 at P35.40); & BLOOM (-P0.20 at P9.50) led decliners among actively-traded shares. Turnover remained listless at P4.22bn, with gainers-losers scoring 91-108. Net foreign selling widened 37% to P884mn.
Anchored on hope: Local investors might take heart on US equities’ sharp incline (DJIA +396 points), anchoring on efforts to resolve the trade discord between China & the US. Skeptics meanwhile, may continue to stay on guard with volume turnout to verify momentum gauges. Selective play is seen, with select shares on headlines likely to corner local traders’ interest. Immediate support is 7,500, resistance 7,600-7,650.

Manila Water Company, Inc. (MWC)’s fully-owned Manila Water Phil. Ventures, through Obando Water Consortium Holdings (OWCHC), will own 90% of the JV firm with Bulacan Water District (BWD) for the construction, rehab, maintenance & operation of the water supply system & sanitation of BWD. The concession will be for 25 years.

ISM Communications Corp. (ISM)’s Execom approved the purchase of 883.73mn unissued ISM shares at P1.45/share by Dennison Holdings Corp., a firm owned by Dennis A. Uy. 25% of the P1.28bn purchase will be paid upon subscription, 75% no later than end of 2018. Dennison will own 45.13% of the outstanding capital of ISM.

DFNN, Inc. (DFNN)’s board approved the set up of 3 subsidiaries that will be engaged in software dev’t., new gaming technology & IT services. These units will create new revenue stream for DFNN. Also, DFNN bought 100% of Kirshner Games Int’l, Inc., a service provider for Phil. Offshore Gaming Operators (POGO).

AgriNurture, Inc. (ANI) notified the Exchange that the National Food Authority (NFA) has considered ANI’s proposal on original proponent status for a project involving a joint venture (JV) for the rice supply requirements of NFA. The project will now proceed with the technical & legal processes under NEDA’s terms & procedures, on JV between government & private entities.

TUGS gets stake in tugboat operator:

Roxas and Company, Inc. (RCI) will hold a special meeting on 10 Sept. to approve the increase in its authorised capital stock & creation of preferred shares. The board will also seek approval for RCI to act as comaker/surety of Roxaco Land for the latter’s P250mn term loan & pledge RCI treasury shares as security. No other data was given.

Metro Alliance Holdings & Equities Corp. (MAH)’s board approved the reclassification of the firm’s A & B shares into a single class of common share, with no changes to rights & privileges. No other data was given.

Economic managers will meet Pres. Duterte today to discuss a compromise on 2019’s budget & a ‘hybrid’ system that would include funds that can be disbursed for more than a year. The House is also poised to resume work despite their 17-27 Aug. break.