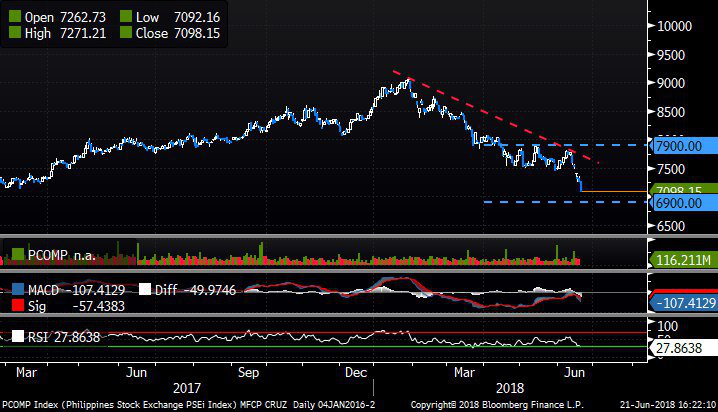 Wait-and-see mode. Market participants will be monitoring supply pressure in local equities, specifically to check on the PSEi’s holding power above 7,000. If the same trend in net foreign selling occurs, the next level to watch is 6,750. Meanwhile, watch out for possible positioning from contrarians who are scouting for bargains based on thebourse’s current state. Immediate support is 7,000, secondary at 6,900, resistance 7,130.

Eagle Cement Corp. (EAGLE) sees its 3rd facility in Bulacan to start contributing to earnings by 2H18. The 2mn MT line would add to its current 5.1mn MT/year capacity & full operation is seen in 3Q. Meanwhile, the Cebu plant will add another 2mn MT, once completed in 2020. EAGLE sees 2018 earnings of P6.5bn from P4.26bn in 2017.

Sta. Lucia Land, Inc. (SLI) approved the purchase of a total of 63.7ha. land in in Batangas, Davao del Sur, Laguna, Pangasinan, Quezon, Zambales, Iloilo, among others. Also, SLI got approval to enter into JV for 7ha. lot, the biggest of which is in Iloilo City (4.8ha.). SLI will also avail a 7-year corporate note worth P3bn with max. of 19 investors, plus over allotment option of P2bn.

Vivant Corp. (VVT)’s board approved the firm’s investment in Vivant Infracore Holdings, as well as the purchase to & payment for additional shares in Southern Grove Properties & Dev’t. Corp. No further details were given.

IRC Properties, Inc. (IRC) will have shareholders approve on 20 July the change in its name to Phil. InfraDev Holdings, with its business model as an infra holding firm. Also, IRC’s fully-owned Interport Dev’t. Corp. will change its name to Greater East Metro Dev’t. Corp., which would entail a change in directors & increase in capitalization. IRC will also incorporate a new fully-owned unit that would cover mass transportation projects, named Alternative Metro Transport System.

85% of mines that were reviewed passed, MICC says:

Mining Industry Coord. Council (MICC) said 23 of 27 mines that were reviewed were already cleared. The remaining 4 however, failed & were unidentified. Finance USec. Again also said the 4 were ‘large-scale’ mines. All findings will be subject to final decision by Pres. Duterte & DENR. MICC will convene again on the last week of July. RPP

signed another deal in Bahrain:

Revolution Precrafted Properties (RPP) signed an accord with Property One Investment in Bahrain. RPP will design & supply up to 500 modular residential villas for Property1 over the next 5 years. Each 200sqm. villa will have 4 bedrooms valued at $320k & up.The latest would add to more than $7.5bn worth of various int’l. contracts.