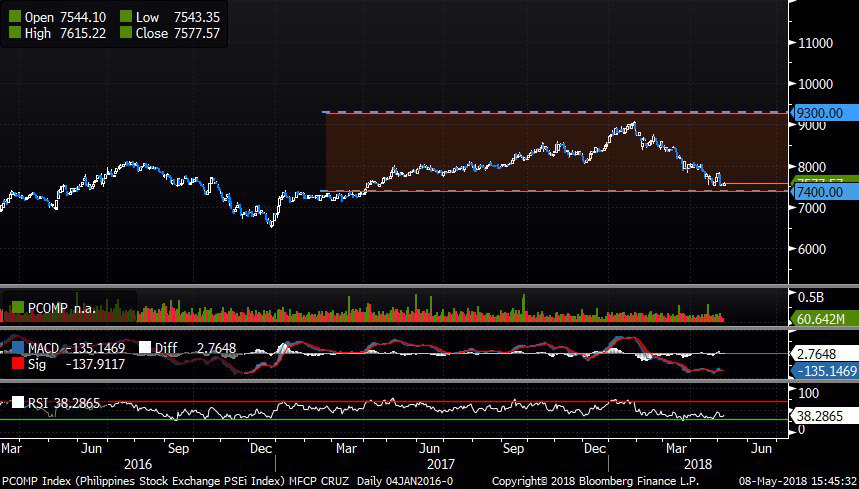 Traction on momentum gauge. Momentum watchers will be on a close watch, on the gradual resumption of risk appetite for equities. Most will check the possibility for gauges to trump past 7,650, or better. Thus far, encouraging 1Q18 results have firedup optimism on prospects for succeeding quarters this year, despite uncertainties on the local central bank’s policy move tomorrow & Wall Street’s relatively muted reaction to the US’ withdrawal from the 2015 accord with Iran. Hunt for good trading windows. Immediate support is 7,550, resistance 7,650-7,670.

Shares unchanged on US withdrawal from 2015 deal with Iran. US equities cut on earlier losses following a rally in energy shares, after Pres. Trump withdrew its earlier agreement with Iran. Financial sanctions were also reinstated as a result, disallowing firms to form new deals with Iran. DJIA +2 points, 24,360 (+0.01%), Nasdaq Comp. +1pt, 7,266 (+0.02%).

Century Properties Group, Inc. (CPG)’s board approved the joint venture with Mitsubishi Corp. for the development of real estate projects & authorized Amb. Jose E.B. Antonio to enter into an agreement for the purpose. No other details were given.

Robinsons Land Corp. (RLC) obtained Phil. Comp. Commission’s (PCC) clearance for its JV firm with Hong Kong Land Group (HKLG) for the purchase of a property in Block 4 of Bridgetown East, Pasig City. The JV for township undertaking, will be 60%-owned by RLC & total investment is at P5.6bn.

DoubleDragon Properties Corp. (DD) inaugurated its 4-tower DoubleDragon Plaza that offers 130,000sqm. leasable space at P800/sqm./mo. rental. Two more office buildings are slated to be completed late 2018, while another Grade A office complex & Ascott Meridian Park will be finished in 2 years. DD Meridian is on 4.8ha. lot at the cor. of Edsa & Diosdado Macapagal, & will offer 280k sqm. leasable space.

Filinvest Development Corp. (FDC) has set P45bn capex for 2018, 75% of which will be for its property unit, P10bn as reserves for other potential investment. Of the P34bn property share, P5bn will be for FDC’s hotel group. FDC has 8 new hotels in the planning & construction stages that would bring 1,700 additional rooms.

LT Group, Inc. (LTG) plans P10bn-P11bn in capex for 2018, P3bn of which will be for Eton Properties. Eton has 140k sqm. leasable space & will open its 5th BPO tower in Centris, QC. It will also have hotel ventures with potential partners in the future.

Lower power rates for May seen:

Manila Electric Company (MER) sees reduced power rates for May billing of around P0.5436/kWh, due to lower generation & transmission costs. Gen. charges are seen at P5.0523/kWh, -0.4212/kWh. The decline was due to lower WESM & IPP prices.

Energy Development Corp. (EDC) sees flat net income attributable to equity holders of P8.8bn for 2018. EDC VP & Head for Corp. Finance, Erwin Avante, said this would depend on putting the units back online. Meanwhile, EDC chief Richard B. Tantoco said their foray in solar power would take a pause for 2018 as so many players have entered this market. Wind investments would also be limited to maintaining EDC’s concession areas. EDC’s 2018 capex was maintained at P6.1bn.

National Privacy Commission (NPC) ordered Jollibee Foods Corp. (JFC) to suspend its online delivery system until the site’s vulnerabilities are addressed. NPC clarified, while the database has not been breached, prevention is being made to ensure there’s no repeat of Wendy’s database breach.

Globe Telecom, Inc. (GLO) is open to working with TEL for the proposed independent firm that would build cellular towers. The tower-sharing venture would help both firms save on capex.

Manulife Financial Corp. (MFC) launched its first C$600mn green bond float in Canada at 3.317% fixed/floating rate until 09 May 2023 & 0.78% over 3-month CDOR thereafter. Proceeds will finance or refinance in part of in full, its drive to finance renewable energy, green buildings, sustainably-managed forests, energy efficiency, sustainable water, among others.

Phoenix Petroleum Philippines, Inc. (PNX) broke ground for the construction of its own asphalt plant in Calaca Industrial Seaport Park, Batangas. PNX & TIPCO Asphalt have 40% each in the JV firm, while PhilAsphalt has 20%. TIPCO Asphalt is the leading producer & distributor of asphalt in Thailand & Asia-Pacific.

Widus Int’l. Leisure, Inc. of Korea plans to spend $1bn over the next 8 years for an integrated casino-resort in the Phils. Widus signed an agreement with Renaissance Hotels Int’l. for the $200mn Marriott Hotel in Clark that will be completed this September. Another expansion was made last April that will be completed 3Q 2020 at a cost of $300mn.