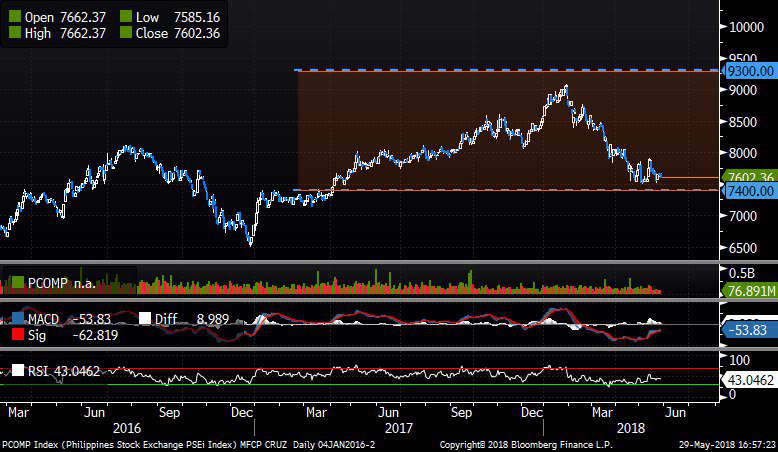 Cautious waters. A repeat of Italy’s political election is bound to lead headlines in Asia’s markets, as concerns mount on stability of the euro zone. This would likely add increased volatility on currencies, with questions hanging on whether or not the ECB would intervene in their markets. At home, focus will be on the PSEi’s staying power above 7,500, with secondary support pegged at 7,370-7,400. Stay alert for possible buying from contrarian players.

In the red. Asian marts pulled lower Tuesday, as players eyed political tension in Italy and plunging crude-oil prices; slump in financials, tech, and steelmakers shares weighed across the region.

Slightly up. Oil prices were only slightly up Tuesday, as easing of output cap by OPEC continued to hurt upward pricing. Pressure continues to mount amid concerns over ‘Quitaly’ and possible decline in European oil demand. West Texas Intermediate (WTI) rose $0.11 to $66.84/barrel.

San Miguel Corp. (SMC) submitted an unsolicited proposal to DPWH for the extension of Tarlac-Pangasinan-La Union Expressway (TPLEx) to Ilocos Sur. SMC is also looking at the costing.

JG Summit Holdings, Inc. (JGS) will inject P1.8bn into Robinsons Bank (RB) this July, while RRHI will provide P1.2bn. This would allow RB to meet the P15bn minimum capital required by BSP to operate a network of over 100 branches. RB is 60%-owned by JGS, 40% by RRHI.

Udenna Dev’t. (UDevCo) plans to spend $5bn over the next 10 years for Clark Global City’s horizontal projects such as road networks. UDevCo already spent $1bn for the rights to the long-term lease of the 177ha. lot in 2017 & plans to set up hotel, casino, office & retail complexes, transport terminal, among others. The hotel & casino is slated to open by 2022 covering 10ha.

BSP is siphoning off liquidity in the system by offering term deposit auction facility (TDF) next week. The cut in reserve rqmt. from 19% to 18% will start 01 June.

Center for Asia-Pacific Aviation (CAPA) said PAL’s new 6 units of Airbus A321neos will be used to expand flights in Australia & launch flights to India while 4 units of A350- 900s will be used for North America. Meanwhile, CEB is growing its A320 fleet by 7 more this year.