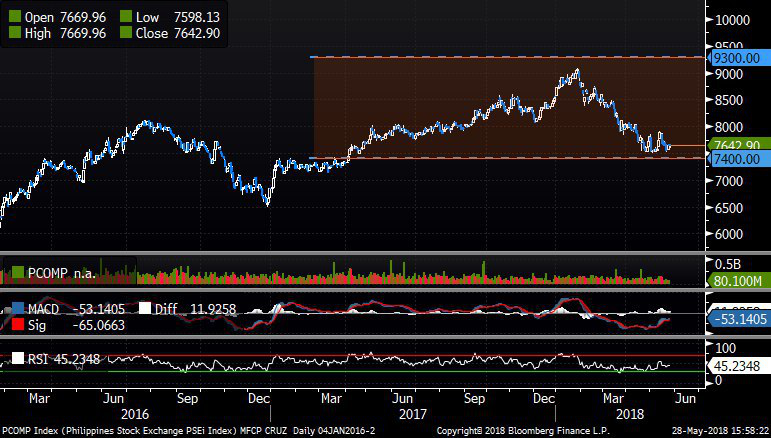 Sideways for now: With Wall Street on Memorial Day holiday, sessions might score another flattish performance, as participants review the impact of wage boards’ review on regional wage rate. Select sectors might shine esp. property, for sequel stories on their expansion drive, as well as telco shares. Immediate support is 7,570-7,600, resistance 7,680-7,690.

Mixed tone: Asian stocks were mixed on Monday, with optimism about the Korean Peninsula and a new slump in oil prices.

Closed for Holiday: US Market was closed in observance of Memorial Day.

Megaworld Corp. (MEG) has pre-sold 70% of 6.3ha. Shophouse District in San Fernando City, Pampanga. MEG sees P1bn sales from the project since its launch June 2017. The project comprised 98 lots ranging 276-680sqm. (or P12mn-P32mn per lot), with ground & 2nd levels for commercial use, the 3rd for business owner’s residence. Lot turnover will start end-2019.

Cebu Landmasters, Inc. (CLI) partnered with Lyceum of the Phils. Univ. (LPU), where CLI will be project planner & manager for the latter’s Davao Univ. Town Campus in Sun City Road, Buhangin, Davao del Sur, or less than 10 mins. away from the airport. Dev’t. of the 17ha. mixed-use project will start 4Q18, 5.2ha. of which will be for LPU Davao campus.

FGEN open to team-up with SMC for LNG:

First Gen Corp. (FGEN) is open to team-up with SMC for the $1.2bn LNG terminal in Batangas. SMC earlier said they intend to expand the capacity of 1,200MW Ilijan natural gas which may be expanded by another 1,800MW later on, once LNG is available in the country.

Alliance Global Group, Inc. (AGI)’s InfraCorp Dev’t. Inc. is prepared to start the 2-km, P3bn Skytrain monorail this year after DoTr granted original proponent status. The Skytrain will be open to the public early 2021 & will be run by InfraCorp. prior to the transfer of ownership title to gov’t.

First Philippine Holdings Corp. (FPH) bought 68% of Asian Eye Institute & will set up a senior HS program that provides vocational training. FPH is spending P100mn for Asian Eye, & P100mn-P200mn in education this year. The firm launched First School that offers training to locators at First Phil. Industrial Park. Capex for 2018 is at P22bn, P12bn of which will be for ROCK, P8bn for FGEN, the balance for Benpres.

Phoenix Petroleum Philippines, Inc. (PNX) bought 75% of Action.Able, Inc. & Think.Able, owners of Pos!ble.net. This digital payment platform was bought for P72mn & will be used for point of sale financial transactions.

FNI will proceed with FOO:

Nickel Asia Corp. (NIKL) plans to increase shipment volume by 13% to 20mn WMT. The firm anticipates higher prices as demand outstrips supply, esp. with the use of batteries for electric vehicles (EV).

Wage boards tasked to do a review: