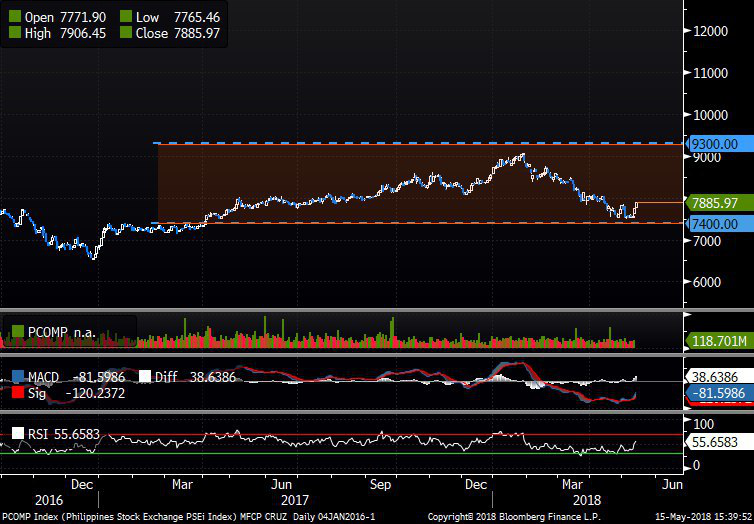 Mixed session. Some players might seize on the mart’s recent strength to take profits, possibly taking their cue from the renewed increase in US Treasury yields. However, declines might be limited by gradual positioning from other investors. Sessions could stay mixed, as equities participants weigh on 1Q18 results. Immediate support is 7,820, resistance 7,950.

Filinvest Land, Inc. (FLI) intends to launch P16bn residential projects in 2018 & allotted P23bn in capex. Of the total capex, 41% will be for office dev’t., 34% residential, 11% retail mills, the balance for land banking.

Petron Corp. (PCOR) is talking to contractors for its refinery expansion & petrochem project in Bataan. This refers to the firm’s continuous catalytic reforming unit (CCRU) that would produce mixed xylene, toluene & benzene. PCOR’s facility is running at almost full capacity of 180,000bpd. The expansion would raise capacity to 300,000bpd. PCOR has set P15bn capex for 2018 for local & Malaysia operations.

Xurpas Inc. (X) subsidiary, ODX Pte Ltd., will hold an initial coin offering where utility tokens of up to US$100mn will be sold to institutional & accredited investors as defined under Singapore laws. ODX will allow consumers to access the internet for free via sponsored data packages. The fund raising exercise will help build ODX infrastructure. Meanwhile, the tokens are not available for sale to citizens or residents of the Phils., US or China.

Data from BSP showed remittances for March fell 9.8% at $2.36bn, reversing Feb.’s +4.5%. This stemmed from the repatriation of Filipinos from Kuwait & base effect as a result of the sharp increase in remittances in March 2017 at 10.7%.