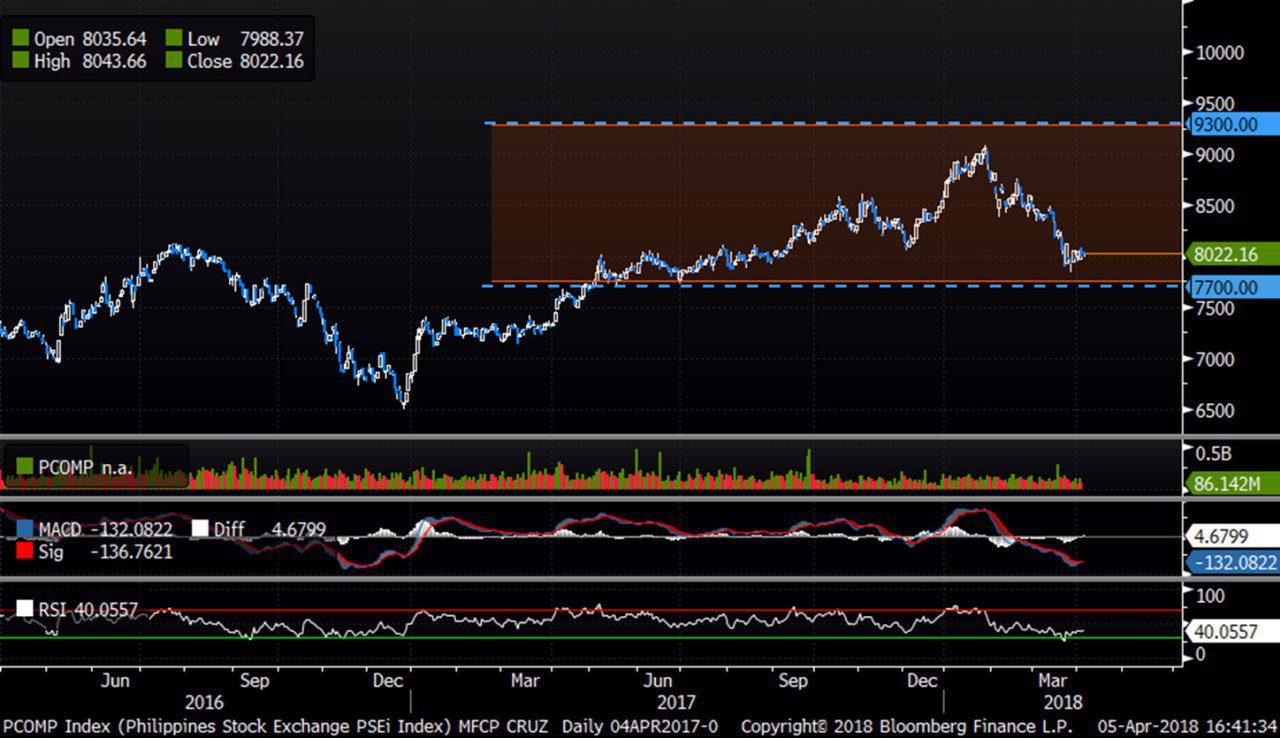 News Highlights: U.S. equities ended higher on Thursday as investors eased out their fears on the possibility of a full-blown trade war between the U.S. and China. On the local market, NEDA has endorsed the P735.63bn Bulacan int’l airport project of San Miguel Corp. (SMC) for Pres. Duterte’s approval. Jollibee Foods Corp. (JFC) said DoLE order is not yet final & executory & the matter is pending appeal. Meanwhile, PSA reported higher consumer prices for March at 4.3%, after alcoholic beverages & tobacco rose 18.6%.

Ended strong amidst trade tariffs issues: Asian stocks rose Thursday as investors have a reversal in sentiment after indications showing U.S. and China are open to negotiations rather than intensifying threatened tit-for-tat trade tariffs.

NEDA has endorsed the P735.63bn Bulacan int’l airport project of San Miguel Corp. (SMC) for Pres. Duterte’s approval. The plan is to build a terminal by 2023, for 100mn passengers on 1,168 aerotropolis site in Bulakan, Bulacan’s 2,500ha.

Jollibee Foods Corp. (JFC) said DoLE order is not yet final & executory & the matter is pending appeal. JFC stressed they are compliant with the law & remains cooperative with all DoLE requirements & procedures.

Alliance Global Group Inc. (AGI) is spending P80bn this year, 14% higher than its actual spending in 2017 close to P70bn, to further beef up its property and gaming resort businesses. 75% will go to Megaworld Corp. (MEG) while 15% will be allotted for Travellers International Hotel Group, Inc. (RWM) for the completion of its Grand Wing (Phase 3) development.

Following Robinsons Retail Holdings, Inc. (RRHI)’s share-swap buy-in into Rustan Supercenters, Inc. (RSCI), the value of Dairy Farm’s full ownership in RSCI is approx. P18bn. As such, certain members of the Gokongwei family intend to sell some of their shares to GHC Investments Pte Ltd., also a fully-owned member of Dairy Farm, that would lead to the Gokongweis owning 51% of the expanded capital of RRHI, Dairy Farm at 18.25%. The transaction is subject to approval from PCC & SEC.

Philippine National Bank (PNB)’s board approved the set up of US$1bn Euro Medium-Term Note (EMTN) program. No other data was given.

Del Monte Pacific Limited (DMPL) will change its stock symbol to DELM. No date has been given yet on the effectivity of the change.

A Brown Company, Inc. (BRN) will not take part in the group that reportedly will handle rebuilding Marawi with China State Construction Eng’g, among others. The reconstruction cost was estimated at P17.1bn.

Shang Properties, Inc. (SHNG) clarified to the Exchange they have no involvement in the operations & business of Shangri-La Boracay, as this is owned by Makati Shangri-La Hotel & Resort. Reports were released Boracay will be closed for 6 months from 26 April 2018, to allow gov’t. to rehabilitate the area.

DWC to be affected by Boracay closure:

Discovery World Corp. (DWC) said Boracay’s 6-month closure would significantly affect operations, but the firm has enough liquid assets to sustain requirements. DWC’s expansion in Palawan & other areas, would also allow them to spread operational risks. DW added, the move would provide time to accelerate their renovation & prepare for re-opening.

2GO Group, Inc. (2GO) will merge with Negros Navigation (NN) via a share-swap, with 2GO as surviving entity. Based on plans, the swap will be 0.26 NN for one 2GO share.

Companies with Ex-dividend on 10 April:

Ten agencies primed by DBM will undertake the Pasig River ferry system that will be bidded out mid-2018. The plan covers 17 new stations (on 12 existing) over the next 4 years that can serve up to 76,800 passengers daily. There will also be 12 new bridges that will be built by DPWH across Pasig River, 2 of which will be financed via grant by China, another grant is preliminary being discussed with France.