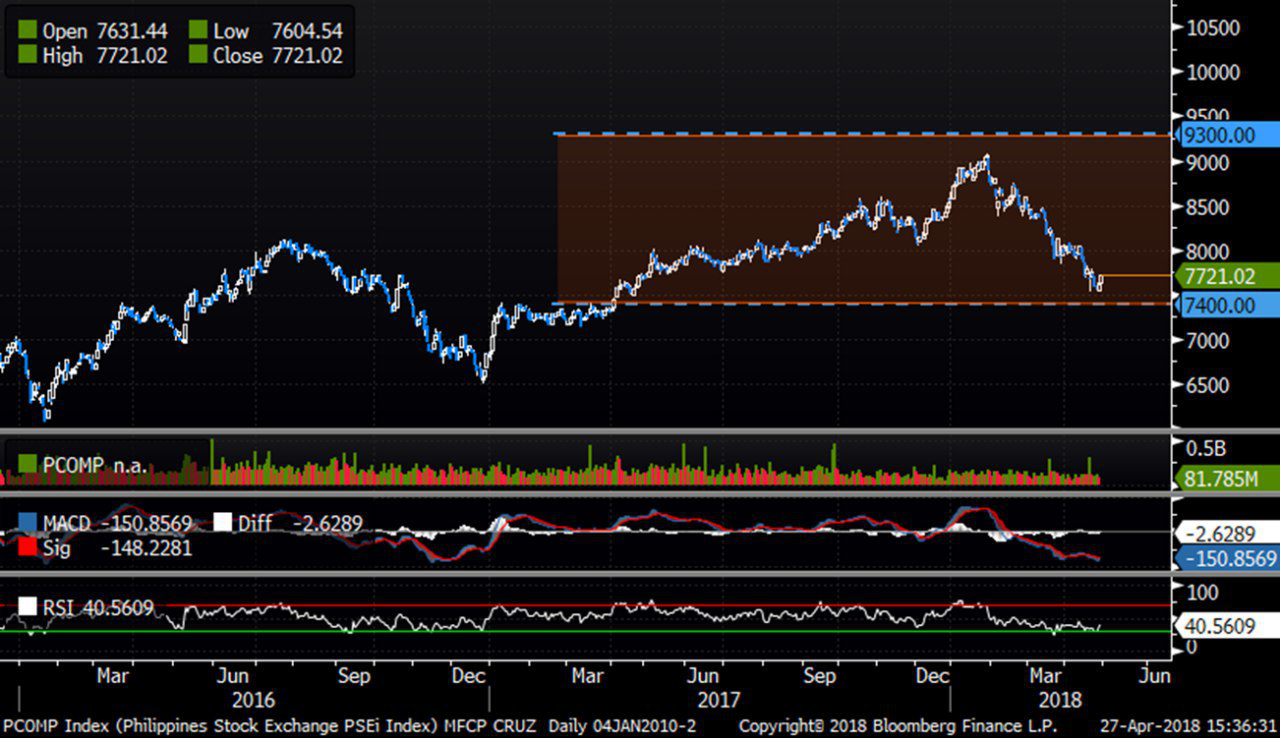 Direction is up. Prospective silver lining for a credit rating upgrade for the Philippines & North as well as South Korea’s commitment to work for a nuclear-free peninsula are catalysts that will support buying initiatives Monday. The other variable to watch would be on momentum that will support an ascent, to push back gauges back to the 8,000 mark. Immediate support is 7,720, resistance 7,900-7,950.

US equities mixed. US economic growth slowed in 1Q (+2.3% from 4Q17 +2.9%) due to weak consumer spending, but wages were up at their fastest in 11 years that added to inflation fears. Tech & energy shares were weaker, while consumer shares were up. DJIA -11 points, 24,311 (-0.05%), Nasdaq Comp. +1pt, 7,119 (+0.02%). NoKor & SoKor agreed for a nuclear-free peninsula. North & South Korea pledged to work for complete denuclearisation of the Korean peninsula. Both will work with the US & China this year to declare an official end to the 1950s Korean war & set a permanent peace accord.

SM Prime Holdings, Inc. (SMPH) is finalising a deal to purchase the Martel family’s contract (set to expire 2020 or 2022) with the City of Manila to develop & manage the 7ha. Harrison Plaza complex. SMPH chair Henry Sy, Jr. said they could build a shopping center with a residential condo above the complex.

SM Prime Holdings, Inc. (SMPH)’s residential arm, SMDC, is launching a total of 3 residential towers on its 2ha. lot in Chengdu, China. One of the towers will be launched this August, the remaining 2 towers in 2019. SMDC also has some remaining lots in Fujian province but plans are still under review. On the local front, SMDC sees launching its JV with Federal Land within the year, for the 3,400sqm. property along Ayala Ave.

Puregold Price Club, Inc. (PGOLD) sold its 70% in PG Lawson to Japanese partner, Lawson, Inc., exiting the convenience store business since it ventured into this retail segment for 3 years. The Lawson business covers less than 10% of PGOLD’s portfolio.

Philippine National Bank (PNB)’s board approved the swap of 6mn PNB General Insurers Co. shares for 178.89mn common shares of Allied Bankers Insurance (ABIC). This would raise PNB’s stake in ABIC from 4% to 22.7%. PNB Holdings has 34.25% in PNB Gen.

STI sets up academy in Legazpi:

S&P hints of rating upgrade for the Philippines:

Finance chief Dominguez said if Landbank cannot buy shareholders of the Phil. Dealing System (PDS), gov’t. plans to develop its own bond exchange. No further details were given.

Finance chief Dominguez said Pres. Duterte wants infra projects completed quickly. While NEDA approved several projects, among which included the P736bn Bulacan airport of SMC, NEDA wants to review the final terms of the concession agreement. Dominguez also said SMC was not prohibited from teaming-up with other groups too.