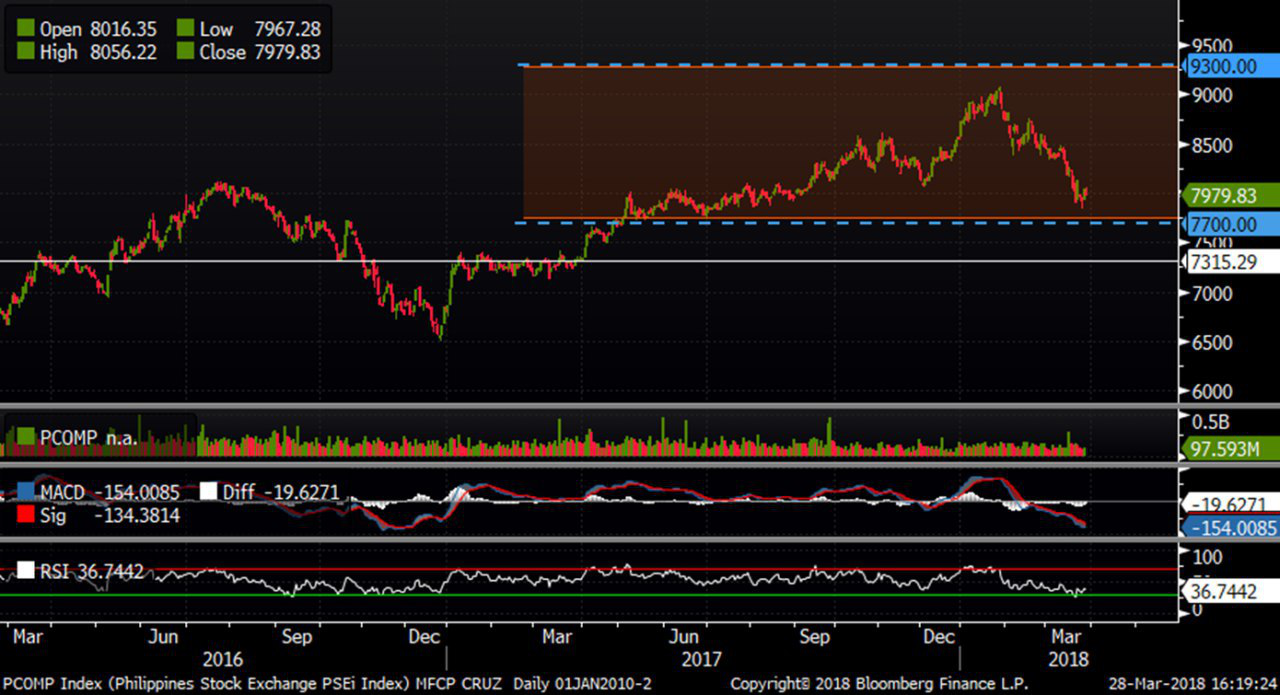 Post-Easter support. Sessions might start on subdued note, although most might take their cue from Wall Street’s overnight advance. Possibilities for the PSEi to cross above the 8,000 mark will continue to be re-tested, as fund managers reposition excess cash for their 2Q portfolio line-up. Position gradually on dips. Immediate support is 7,960, resistance 8,200-8,230.

Link between NLEx-SLEx to start soon:

NLEx will start constructing the P23bn linking North Luzon & South Luzon expressway by June-July. Startup works were delayed by the deliver of right-of-way. Completion is slated 2021 which will reduce travel time between NLEx & SLEx from 2 hours to 20 minutes.

Shakey's Pizza Asia Ventures, Inc. (PIZZA) aims to increase sales by double-digit for 2018 with the opening of 20 new stores outside Metro Manila. This would boost PIZZA’s store count to 228 by end of the year. Average investment ranges P18mn-P25mn/store.

Euro-Med Laboratories Phil., Inc. (EURO) board approved the sale of 47,750sqm. of lot in Ibaan, Batangas to Soleil Capitale Corp. for P33.234mn. The lots are idle lands owned by the firm & not part of operations.

SBS Philippines Corp. (SBS) will seek shareholders’ approval on its AGM in 22 June, for Cleon Phil. Holdings’ offer for sale of its 54,598sqm. lot in Bgys. Vergara & Namayan, Mandaluyong.

Alliance Select Foods International, Inc. (FOOD) board approved the change in its par value from P1/ to P0.50/share for its equity restructuring. This would reduce its authorised capital from P3bn to P1.5bn. The deficit that will be eliminated is at US$31.998mn.

DFNN, Inc. (DFNN) plans to introduce hybrid of e-Bingo sites & more sports betting to boost its revenue contribution to Pagcor. No further details were given.

With the successful float of RMB 1.46bn last month, the Finance bureau said more issuances of Panda bonds might be in place without citing details. The float fetched coupon of 5%, 35bps over
China’s benchmark of 4.65%.