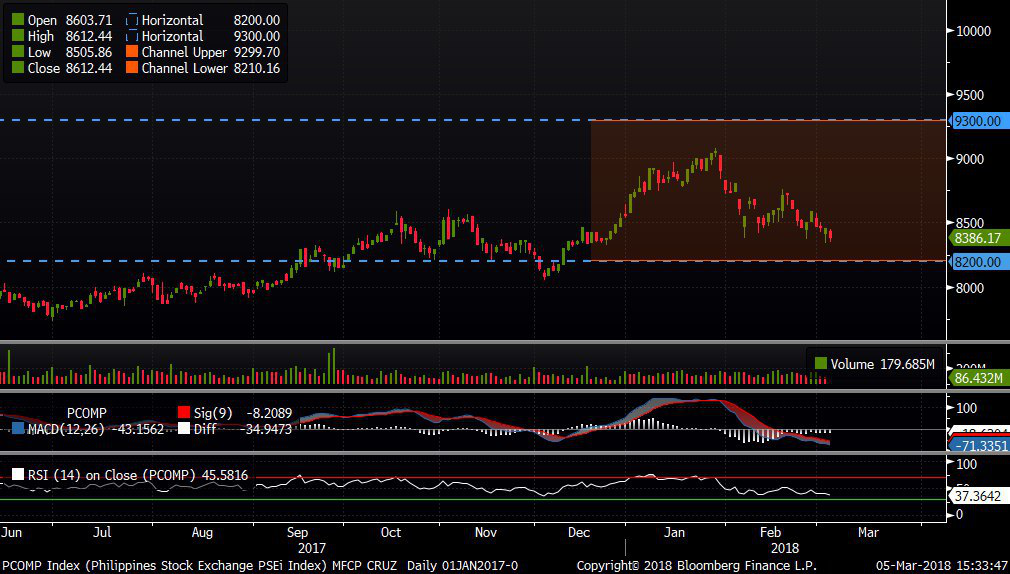 Most bourses down: Most regional marts fell, as Pres. Trump’s tariff proposal cast fears for a possible global trade war.

JG Summit Holdings, Inc. (JGS) will be removed from the Financial Times Stock Exchange (FTSE) index based on the latest rebalancing, as well as Lopez Holdings Corp. (LPZ) from FTSE small cap. The change will be effective on 16 March.

Manila Electric Company (MER) said power rates could move up anew in March due to the peso’s weakness & shutdown of more power plants. MER said March adjustment would include the P0.33/kWh increase that was part of the P1.08/kWh rate hike last February, bringing the overall rate to P9.47/kWh from Jan.’s P8.72/kWh.

The Court of Tax Appeals (CTA) affirmed a division ruling ordering BIR to refund P1.647bn to Lucio Co & family for erroneous payment of capital gains taxes in the case stemmed from Puregold Price Club, Inc. (PGOLD) 2012 share-swap of the Co family’s Karelia Management Corp. CTA said the share-swap should be tax-free, as the law allows non-recognition of gains when further control of a firm is increased collectively.

The Phil. Competition Commission (PCC) issued circular 18-001 that raises the reporting trigger for M&A deals that need their approval. ‘Size of person’ is defined as P5bn from P1bn previously, while the value of assets of the acquired entity is now at P2bn from P1bn.

SEC issued a warning to the public against investing in 1Legacy & Wahana Credit/Wahana Multipurpose Bank, as these are not registered with them. Wahana is said to be soliciting investments from the public in return for as much as 12% return per week & 48% monthly interest. The firm acts as lending company for casino players.