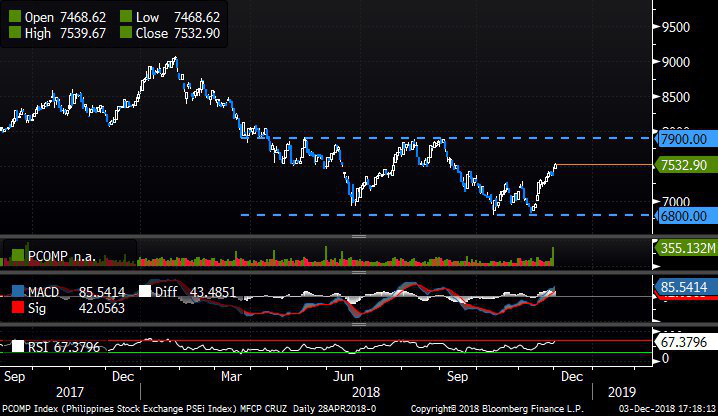 Petron Corp. (PCOR) made a Nov. cargo diesel shipment to Unipec, the trading arm of China’s state-owned Sinopec. Unnamed sources also said another was made for 17-19 Dec. from Bataan, but it was not clear if this tender has been awarded. No official comment has been given by PCOR, who is used to be a net importer of diesel.

Union Bank of the Philippines, Inc. (UBP) raised its final bond float from P10.5bn to P11bn due to additional demand from retail investors. The original size was at P5bn.

D.M. Wenceslao & Associates, Incorporated (DMW)’s board approved the increase in authorised capital for fully-owned Aseana Holdings, Inc. from P1.5bn, to P4bn. No other details were given.

Holcim Philippines, Inc. (HLCM) will boost cement capacity by 30% to 13mn MT by 2020 with an investment of almost $300mn. Focus will be on Bulacan & Misamis Oriental plants through the installation of new & efficient kilns, mills & waste heat recovery system. Meanwhile, HLCM’s board approved the dissolution of fullyowned unit, Excel Concrete Logistics, Inc. No other data was provided.

Marcventures Holdings, Inc. (MARC) will have shareholders approve the planned increased in authorised capital from P4bn to up to P7bn, that would include the creation of a class of up to 100mn non-voting, redeemable preferred shares at P10/share par value, or P1bn. The firm also plans to issue warrants.

LTFRB approved a provisional rollback of public utility jeepney (PUJ) fares in Metro Manila from P10 to P9 for the first 4 km. The new base fare will be effective after publication. The move was prompted by the decline in fuel prices.