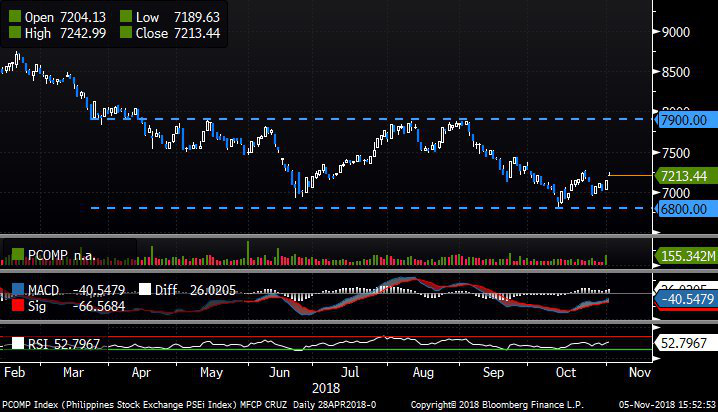 TEL, Smart & Ericsson signed MoU with Clark Dev’t. Corp. (CDC) to turn the freeport zone into the first Smart 5G City. Launching of the service will be within the month. 13 sites are now 5G-ready & the target is to raise this to 25 by mid-2019.

MER VP Fernandez said this month’s charges will be ‘flattish up’ given 2 reductions in the past billing months. He said higher Malampaya gas prices may still be offset by improved value of the local currency against the dollar. Also, higher WESM due to transmission congestion may be balanced by higher capacity availability.

MFC to book gain from reinsurance, plans buyback of shares:

MFC will release over C$1bn in capital with the reinsurance of its legacy businesses, including mortality & lapse risk on part of its Canadian universal life policies. The parties include Jackson National Life Insurance, RGA Reinsurance. The move would allow MFC to book C$175mn in after-tax gain for 2018. Also, MFC will acquire up to 40mn of its common shares, subject to regulatory approval, aside from raising its common shares dividend by 14%.

VLL prepares to float P10bn fixed-retail bonds, with base size of up to P5bn plus P5bn oversubscription option. CHIB Capital will be issue manager for the issuance. Share buyback was also extended to 05 Nov. 2020 for total of 3bn shares.

SEC noted the settlement of dispute between the Romero’s ownership dispute & upheld the Oct. 2016 decision dismissing the case filed by Reghis Romero-led Harbour Centre Port Terminal against Michael Romero-led Harbour Port Centre Holdings & PCOR. PCOR has 35% in Manila North Harbour Port, Inc. (MNHPI) after the firm raised its capital stock. In 2017 however, PCOR sold its block to ICT, which raised its block to 50%. MNHPI has the 25-year contract to operate the 53ha. Manila North Habor terminal.

China conglomerate will invest a casino in CEZA:

Shanghai Jucheng Supply Management is set to invest $100mn for an integrated resort with casino in Cagayan Ecozone (CEZA). The MoU was signed last week. Jucheng covers bulk commodity trade, customs clearance, quarantine inspection, manufacturing, logistics, among others. Under RA7922, CEZA is allowed to grant a license to a casino.