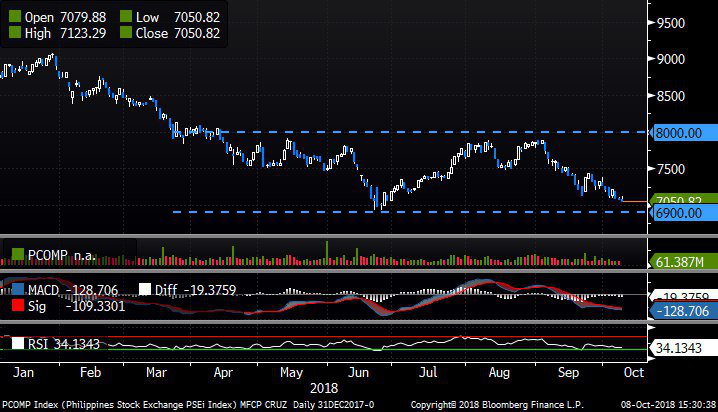 Marts ended lower: Asian markets dropped on Monday led by Chinese stocks following PBOC’s move to cut bank’s reserve requirement by 1 percentage-point at a time of fears the impact of the China-US trade war will deepen.

Crude slightly fell: Crude ended lower on Monday on reports that US is softening its stance against Iran crude exports but decline was limited by hurricane-related disruptions in Gulf of Mexico and a reported explosion at a key oil refinery in Canada. West Texas Intermediate (WTI) shed $0.05 to $74.29/barrel.

SM Prime Holdings, Inc. (SMPH) aims to spend P120bn in the next 2 years to finance its expansion until 2020. The amount does not include yet potential acquisitions. SMPH has also not yet felt the impact of inflation & higher interest rate, with 3Q results in-line with growth target.

SM wants to take minority stake in businesses to be acquired:

SM Investments Corp. (SM) vice-chair Teresita Sy-Coson, said they might favor businesses where they get minority stake instead of taking majority. She prefers the target firms to be run by main proponents. In 2017, SM bought 34.5% in Nenaco, the parent of 2Go Group & early 2018, 34% in Goldilocks.

RCB teams up with biggest bank in SoKor:

BSP will auction Evercrest Golf Club & Resort golf course in Nasugbu, Batangas of Orient Bank’s Jose Go for P1.65bn. Interested parties may get in touch with BSP’s Asset Management unit. BSP took over the golf course as partial payment for emergency loans obtained by Orient in the late 1990s.

MRT3’s loan remains delayed, pending the status of 48 train coaches from China’s CRRC Dalian. DoTr said the audit made showed certain defects that included weight measurements that did not conform to what was required in the contract. The loan provision from Japan would amount to max. of 38.1bn yen, or P18bn, at 0.1% interest with repayment in 28 years after a grace period of 12 years.