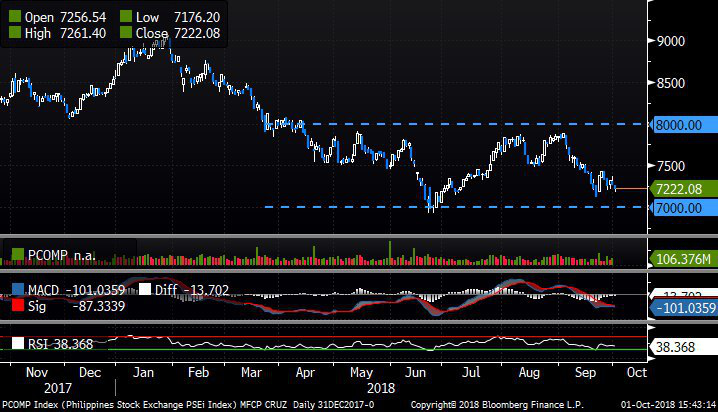 Bourse weakened, PSEi @7,222: Selling pressure prevailed, pulling the PSEi 54 points lower at 7,222 (-0.75%), as participants opted to wait for September’s inflation this week. Industrials (-1.6%) & holdings (-1.4%) led the decline, while services (+0.5%) bucked the trend. SMPH (-P0.50 at P35.65); SM (-P24 at P880); & URC (-P5 at P139.50) were among those that led actively-traded shares lower. Gainers-losers reached 75-101, although turnover was thin at P3.97bn. Net foreign selling reached P677mn.
Catalyst for advance: Sentiment might glide with the region following Wall Street’s lead, in light of the NAFTA accord headline. This catalyst could inspire fund managers to troop back into equities anew, as trade risk prospects abate in view of world leaders’ pro-active stance to resolve their spats. Large caps in property, financials & holdings might be favoured, specifically shares that were badly bruised by the rout. Immediate support is 7,200, resistance 7,300-7,350.

URC buys out block for HURC:

BDO Unibank, Inc. (BDO) approved its accord with Osmanthus Investment Holdings (Singapore), for the latter’s 15% stake in rural bank subsidiary, One Network Bank. Osmanthus will help ONB develop the framework for MSME lending, specifically microfinance. The transaction is subject to regulatory approvals.

Manila Water Company, Inc. (MWC) said MWSS approved the firm’s rebasing agreement for 2018-2022. MWC will stagger the implementation of the rate hike over the 5-year stretch. No other data was given.

House of Investments, Inc. (HI) will merge iPeople (IPO) with AC’s AC Education, Inc. (AEI), with IPO as surviving entity. The transaction is valued at P15.5bn for the combined entity, with 51.3% owned by HI, AC at 33.5%. A special meeting will be called for approval of the MoA between AC, IPO & AEI. HI & IPO sought for voluntary trading suspension from 01 Oct. & will be lifted 9am of 02 Oct. 2018.

Aboitiz Construction (ACI) will set up an overseas unit to expand its reach. ACI has been in talks with engineering, procurement & construction firms in China & received requests for quotes from Japan firms.

Megawide Construction Corp. (MWIDE) approved a share buyback of up to P2bn over a period of 2 years. No other details were given.

Sta. Lucia Land, Inc. (SLI)’s board approved last 28 Sept. 2018, the set-up of Sta. Lucia Foundation, & opening of accounts with CHIB. SLI also approved opening P500mn credit line each to SECB & BPI, & activating its dormant account with AUB. SLI will also enter a JV with the Armed Forces of the Phils. Retirement for a 3,484sqm. project in Iloilo City.

Now Corp. (NOW)’s board approved the payment of 3% per annum of the total amount granted by affiliates Velarde, Inc. & Gamboa Holdings, Inc., until the loan being secured by NOW has been fully-paid to local banks. The affiliates provided collateral for said loan in the form of property & shares of stock.