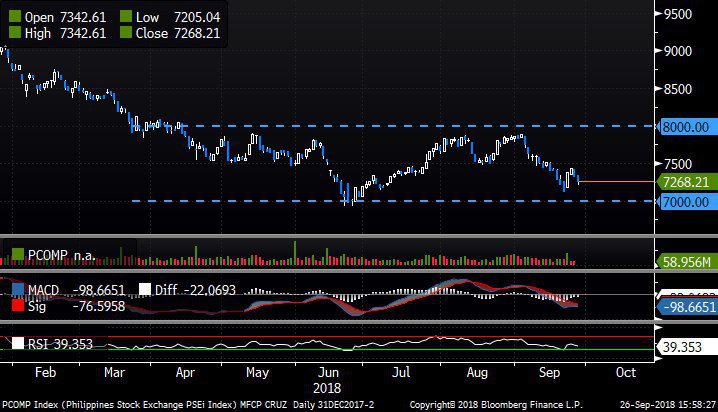 Marts mostly gained: Asian markets were mostly in the green Wednesday ahead of FOMC meeting which traders expects a third interest rate hike by the U.S. Federal Reserve for this year.

TEL rolls out VoWiFi with Samsung:

PLDT Inc. (TEL)’s Smart will partly roll-out this Oct. its Voice over WiFi call over a live network service for users of Samsung devices. The move allows users to make a call or send SMS via a mobile unit’s native dealer using WiFi.

Japan’s snack confectionary producer, Calbee, Inc., sold its stake in Calbee-URC to Universal Robina Corp. (URC) for P170.6mn. The transaction covered Calbee’s 50% block in the JV firm & will be finalised on 30 Sept. 2018.

RLC gets power from GBP:

Metro Global Holdings Corp. (MGH) furthered the Exchange that in view of the increase in their authorised capital from P2bn to P5bn, P750mn of the P3bn increase will be subscribed by Fil-Estate Management (FEMI), P500mn of which shall be paid via offset of outstanding payables to FEMI.

BSP Deputy chief Guinigundo hinted investors should see ‘very strong’ action on the central bank’s (BSP) policy meeting today. Inflation is seen to remain elevated in the last stretch of 2018 & consensus is for 50bps increase to 4.5%.