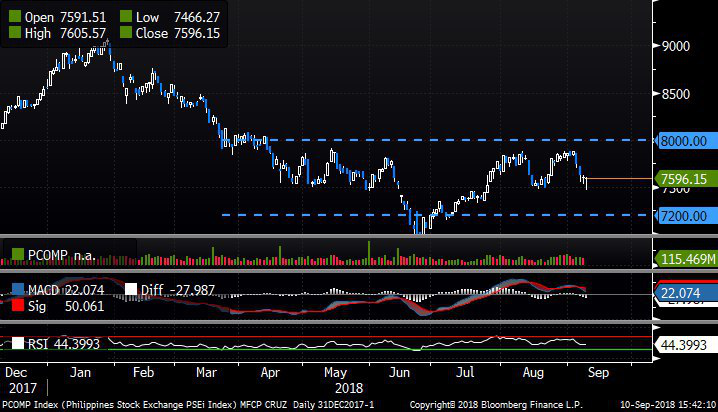 Marts mostly dropped: Asian stocks were mostly lower on Monday, on continued fears of an all-out trade war between US and China and Pres. Trump’s comments urging Apple Inc. to move its manufacturing to the U.S.

Finance chief Dominguez wants San Miguel Corp. (SMC), the parent firm of San Miguel Holdings (SMHC) to guarantee the int’l. airport in Bulacan. Given the P735.6bn undertaking, Dominguez said SMHC’s equity is only at P60bn (based on 2016 data). using 70-30 debt-equity mix, roughly P200bn is needed to be injected as equity.

Rizal Commercial Banking Corp. (RCB) is offering the initial tranche of Long-term Negotiable Cert. of Time Deposit (LTNCTDs) due 2024 out of the P20bn approved float. Offer run is 10-21 Sept., issue & listing on 28 Sept. The LTNCTDs will carry a tenor of 5 years & 6 months.

I ties up with Ripple:

Puregold Price Club, Inc. (PGOLD)’s board approved the incorporation of PurePadala, Inc. which will be in partnership with banks & other fintech entities. The cash remittance unit will benefit customers & shoppers of PGOLD.

MWIDE team-up with PSI for PaREx:

Melco Resorts and Entertainment (Philippines) Corp. (MRP) notified the Exchange of the intent of major shareholder, MCO (Phils) Investments Ltd., to conduct a tender offer for up to 1.543bn common shares, or 27.23% of outstanding capital at P7.25/share. Filing of the tender offer report to SEC & PSE is ‘on or around 17 Sept.’ No other data was given.

Roxas and Company, Inc. (RCI)’s board approved the increase in their authorised capital from P3.375bn to P4.375bn, that would include the creation of P1bn preferred shares. The preferred shares will be non-voting, non-convertible & redeemable. RCI also approved the conversion of its short-term loan with CHIB to a 7-year loan & act as co-maker of Roxaco Land. RCI also approved the issuance of corporate guaranty for P250mn loan conversion & pledged its treasury shares as security.

TECH gets shareholders’ clearance for recapitalization:

Cirtek Holdings Philippines Corp. (TECH) shareholders approved the increase in the firm’s authorised capital from P860mn to P1.020bn, by raising the common shares from P520mn to P640mn, preferred A from P70mn to P110mn. TECH will lower the par value of its shares from P1 to P0.50, preferred A from P0.10 to P0.05. It will then create Preferred C shares from the reclassification.

GDP targets to be reviewed:

NEDA chief PErnia said economic managers will meet on 14 Sept. to discuss realistic GDP growth goal for 2018. Economic managers are also slated to attend the Phil. Eco. Briefing in London on 24-29 Sept. The original GDP target was 7%-8%, vs. 1H18’s 6.3%.

Udenna Corp. signed a share purchase agreement for 70% of Conti’s Holdings. The move is seen to deepen Dennis A. Uy’s (DAU) stake in the hospitality & restaurant management business. Closing of the transaction is seen within Oct. 2018.

PNOC’s solicited process for the $600mn LNG in Batangas will just cover a hub. As such, the previous plan to build a land-based power plant as off-taker for the natural gas has been put on hold, & will instead use a floating storage regasification unit (FSRU) that will also serve as terminal for imported LNG. The FSRU will have an initial capacity of 3mn tons per annum (MTPA) that can power a 3,000MW plant. The FSRU’s capacity may be scaled up to 5MTPA.