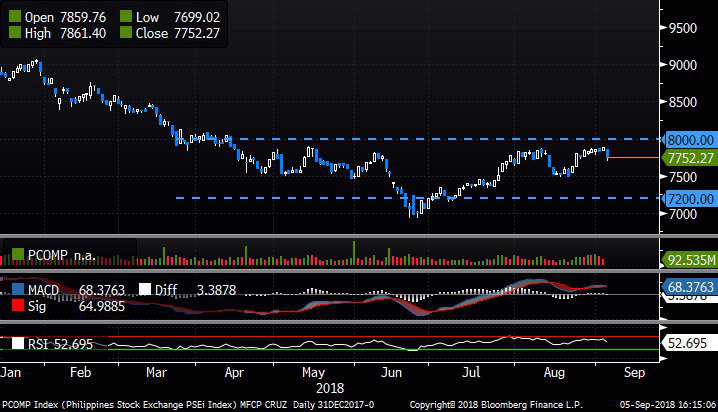 News Highlights: August inflation rose to 6.4% vs. July’s 5.7%, due to higher commodity prices while July’s unemployment stood at 5.4% vs. 5.6% in July 2017. Within the corporate loop, NAIA consortium underscored no gov’t guarantee on their airport proposal, while FGEN remains interested in PNOC’s banked gas.

US shares mixed, tech stocks lower: Sessions were mixed, as wider US trade deficit data for July might prod continuation of trade protection policies. Tech shares were down given congressional interrogation on Facebook & Twitter whether the latter is stifling free exchange of ideas. DJIA +22 points, 25,974 (+0.09%), Nasdaq Comp. -96pts, 7,995 (-1.2%).

TEL issues statement on reports of notice of strike:

Petron Corp. (PCOR) has been awarded by the Dept. of National Defense (DND) P4.416bn petroleum, oil & lubricant contract. Other proponents were disqualified due to failure to comply with requirements.

First Gen Corp. (FGEN) said they’re still waiting for PNOC to respond to their earlier offer for banked gas. PNOC earlier valued the contract at P11.9bn & has no word yet if any party submitted an offer.

Members of NAIA consortium said their P102bn airport proposal does not seek for any gov’t. guarantee. The group’s spokesperson, Jimbo Reverente, said terminal fees provision is included, but this should not be equated to gov’t. guarantee.